Is anyone offering to surrender State assets? “These are matters under consideration”- SARA Chief 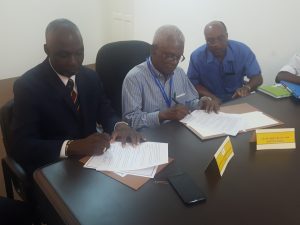 Former government officials, who have stolen State assets, can strike a deal to return those properties but, the Director of the State Assets Recovery Agency (SARA), Professor Clive Thomas on Monday stopped short of saying if anyone has offered to return assets voluntarily.

Noting that under the State Assets Recovery Act empowers the Director could exercise his discretion to seek a settlement “if the conditions are appropriate” to save State resources for seeking a civil recovery if the person, persons or  organisation wants to ink a deal.

“These are matters under consideration. I am not in a position to speak publicly on that matter as yet but it’s a procedure that we have to pursue under the law,” he said.

Professor Thomas made the disclosure at the signing of a cooperation agreement between SARA and the Financial Intelligence Unit which already works closely with the Special Organised Crime Unit of the Guyana Police Force.

SARA, he said, was working closely with FraudNet and the Caribbean Institute of Forensic Accounting to “recover some State assets which we have reason to believe have been unlawfully removed from the State of Guyana and might reside not only in Guyana but outside Guyana”. The SARA Chief added that the FIU has been able to monitor the movements of funds urgently.

Head of the Financial Intelligence Unit (FIU), Matthew Langevine said banks have been cooperating fully in providing information to help his entity generate intelligence to provide SOCU if necessary.

He hailed the cooperation agreement as on which would provide for the safe and secure sharing of intelligence and personal information to detect money laundering, terrorist financing and other financial and serious offences. “The quality of the product produced by the FIU must be of the highest quality that sufficiently supports the work of the law enforcement agencies. It, therefore, cannot operate in isolation but must ensure collaborative arrangements are in place and all relevant and authorities within the AML/CFT (Anti-Money Laundering/ Countering of Financing Terrorism) framework are involved,” he said.

The AML/CFT Act provides for the FIU to ink agreements or arrangement with other domestic entities to share information aimed at stamping out financial crimes, terrorist financing as well as corruption and bribery through SARA.

Already, the FIU has submitted more than 25 intelligence reports and a fresh five have since been reported to SOCU following amendments to the relevant law.