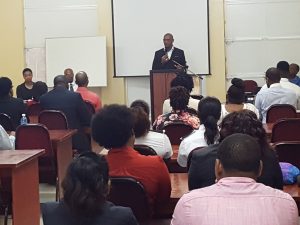 “It’s not for the paucity of laws that we fail so miserably on the various metric and scales of anti-corruption. It’s for the lack of enforcement,” he said at the opening of an anti-corruption training seminar for GRA staff, being held by the State Assets Recovery Agency (SARA).

Wills said Guyana emphasised that “we are never short on laws; we are short on implementation and enforcement”, an example being the 1997 Integrity Commission Act.

He noted that law not only defines corruption- including bribery, embezzlement, concealment of proceeds by public officers-but identifying such crimes and punishing the perpetrators.

Williams said the dilemma facing Guyana is largely an absence of leading by example. “If we ask persons to do things, we have to do them ourselves and what is required of every Guyanese is anti-corruption posture; not one that compromises another’s integrity or self,” he said.

The GRA official, noting that corruption is everyone’s business, he cited the need for urgent “enforcement of the law”. He also highlighted the importance of investigative rather than speculative journalism that vilifies persons outside of due process.

In addition to being a party to the United Nations and Inter-American Conventions against corruption, the National Assembly has already passed the State Assets Recovery Agency (SARA) Act, and the Protected Disclosures ‘Whistleblower’ Act.

SARA’s Deputy Director, Aubrey Heath-Retemeyer, in brief remarks, said the State was spending a lot of money to stamp out corruption instead of going after perpetrators. “If there is not corruption, there is nothing to retrieve. It’s much easier to close the door on corruption than going after stolen wealth. We are in the process of doing that. It’s costing us a lot of money and a lot of time and if we can prevent it in the first place, it’s far far better,” he said.

He said there was no room for “shortcuts and loopholes” around the legal system if Guyana is step up its collective intolerance to corruption.

The SARA official restated that within the past decade, GY$28 billion to GY$35 billion have been lost to procurement fraud; GY$90 billion in capital flight and GY$100 billion to the underground economy. “People may not want to accept it, but it’s a fact,” he said.

2018-05-14
Denis Chabrol
Previous: Political allegiance of SARA’s senior staff won’t affect its work
Next: Is anyone offering to surrender State assets? “These are matters under consideration”- SARA Chief