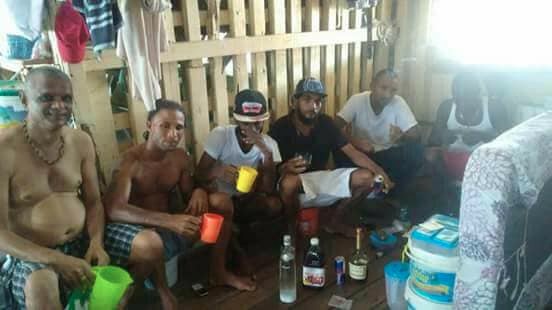 Prisoners at the New Amsterdam Prison with bottles of what appeared to be liquor.

Prisoners at the New Amsterdam Prison, who held a prison party on Sunday- Mothers Day- drinking Ciroc vodka and Hennessy cognac, have told investigators that the bottles of pricey liquor were smuggled into the jail yard on a Town Council tractor.

The Ministry of Public Security said a phone used by an inmate to post the drinking spree on Facebook has since been seized. The Ministry also said prison staff found culpable would be sanctioned. “This kind of misbehavior by the culpable prison wardens will be dealt with very seriously after the ongoing investigations reveal who they are. The Public will be further advised on this matter after investigations concludes,” the ministry said.

However, Director of  the Guyana Prison Service, Gladwin Samuels said a playback of video surveillance recordings shows that the tractor was searched and nothing was found but that did not mean that there might not have been collusion by prison personnel. “There is no direct evidence pointing to any prison officer who would have facilitated the movement of the contraband into the prison. The prisoner would have identified a civilian who brought it.

Based on video evidence, the tractor was searched and the search seemed to have been properly conducted based on what the video is revealing,” he told Demerara Waves Online News.

Pictures of the prisoners holding and consuming what appeared to be bottles of liquor were posted on Facebook of remanded murder accused Abdul Andre Azimullah.

The Prisons Director was upset that the prison service ranks did not observe the drinking, an indication of a lapse in supervision of the prison yard on Sunday. “Sanctions will be taken against those persons who are found culpable,” he said. 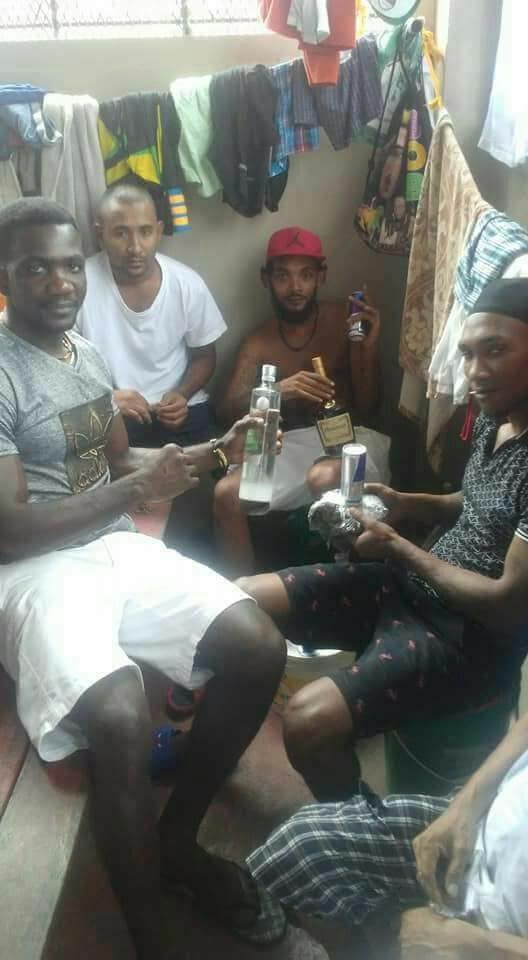 With the video surveillance recording showing that nothing prohibited was found on the vehicle, Samuels did nit rule out collusion by prison personnel. “That’s the prisoner’s account of how he got the items. We still have to do further investigations to establish if that was so because, as it is right now, that is the prisoner’s account. There is no verification that indeed that is how it got into the prison. There could have been other means by which it got into the prison which includes staff  facilitating same which we would still have to do more detailed investigations to verify,” he said.

Samuels said a news conference would probably be held and he has asked for the supervisor on duty to face the media and explain what has happened. “I have made it clear that the Officer-in-Charge of the facility must be at the press briefing because it is time that they are made to answer for their stewardship,” he said.

The Prisons Director said he alone would not be taking blame  because officers must understand that they have to take responsibility for delegated authority.

Concerns continue to be raised about prisoners gain possession of cellphones, marijuana, cigarettes and other items that are prohibited from entering the country’s jails.

2018-05-14
Denis Chabrol
Previous: Is anyone offering to surrender State assets? “These are matters under consideration”- SARA Chief
Next: Maryann Daby charged with attempted murder