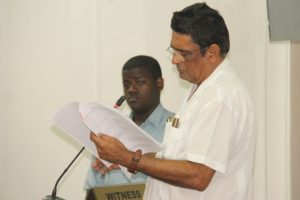 Government Pathologist, Dr. Nehaul Singh on Thursday said proper procedures might not have been followed in removing the burnt remains of the eight miners at Lindo Creek in 2008, and he also said he refused to observe the autopsies that were conducted by a Jamaican team that had been brought into Guyana.

Singh, a Cuban-trained highly experienced pathologist, also said he never saw the reports of the post mortems conducted by the Jamaican team that was headed by an Indian national.

He told a presidential Commission of Inquiry into the Lindo Creek massacre that after his first attempt to reach the scene at the Upper Berbice River was aborted, before he could have made a second planned effort, he had seen on the television news that the remains had been brought to the City.

Under examination by Attorney-at-Law for the Commission of Inquiry, Patrice Henry, the Government Pathologist said had he gone to the crime scene he would have ensured as far as possible that the bones were separated. Unlike a cremated person, he said he saw bones and skulls which he said would have provided a better opportunity for examination. 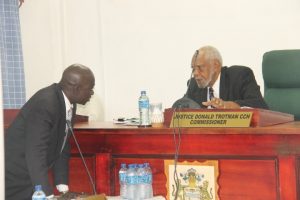 “This is called disaster management. You need to know what you are doing…Eight people are there. You got to be careful how  you removing these things. The problem is that you need to get it separated as much as possible. You just can’t go and scoop them up and put them in a bag and bring them. You not selling mangoes or whatever it is.

Singh said he even though the bodies were on top of each other, “you must see an outline unless they are totally burnt” which would make it “easier to examine”.  The Government Pathologist said he suggested to then Police Commissioner Henry Green that there was need for a Forensic Anthropologist who deals with bones and “that would have been better for anybody” but h never heard back anything from the then top cop.

Singh virtually ruled out the possibility of making any findings even if the bones were exhumed because after  10 years they would have probably already been disintegrated. “You won’t find anything, very difficult,” he said. He also recalled suggesting informally that the bones should be buried at one location with a tombstone of the names of the deceased miners to bring closure to the incident and make available the remains at one location for exhumation if required.

While the bones were in storage for four years, the Pathologist said he never conducted an autopsy. He recalled when he was informed by then Police Commissioner Greene that a Jamaican team was here to conduct the autopsies, he responded by telling the then top civilian law enforcement officer that he would not be observing anyone and he merely guided them to the mortuary and other officials. Singh bluntly told the Commission of Inquiry being conducted by Retired Justice Donald Trotman that he was not prepared to be  a junior functionary witnessing the process.

“I am willing to work with anybody but I am not going to be subservient to anyone,” he said. He said he never saw a report by the Jamaican-Indian pathologist.

The Government Pathologist said, in keeping with Guyana’s laws, police are supposed to observe autopsies but he was unsure whether anyone from the Guyana Police Force had been there.

He also confirmed that his name was scratched out and replaced by that of the Jamaican-Indian pathologist, but he never knew that was done.

Retired Police Commissioner, Seelall Persaud, who had led a team to the Upper Berbice location of Christmas Falls., has already testified that they never went to Lindo Creek because then Police Commissioner, Henry Greene had instructed that the team return to Georgetown after they had engaged and killed one person and recovered several guns.