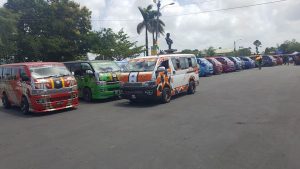 Numerous ‘wrapped’ buses parked at the 1763 Monument ‘Cuffy’ Square earlier this week after police took away their Road Service Licences to force them to respray their buses in one colour.

The Guyana Police Force has eased clamping down on ‘wrapped’ minibuses- those that have been resprayed in designs- until a meeting with minibus operators, ‘A’ Division Commander, Assistant Commissioner, Leslie James said Saturday.

“We have tempered the exercise. We are no longer engaging in the exercise until we have that meeting so they have a grace between now and when they meet with the traffic officer,” he told Demerara Waves Online News.

James said no date has been fixed, and until then the exercise has been put on hold.

While the Guyana Revenue Authority’s (GRA) motor vehicle licence refers to the colour of the bus, the senior police officer said it is a violation of the Road Service Licence for minibus owners/ operators to change the colour of their vehicles or placing.

“It is reckless for them to go and do this wrapping and to be told by the police that this thing is a breach. You can’t just do something, you have to consult, given advice and then you proceed but they just went and decide that this thing is looking nice,” he said. Williams contended that the bus operators were holding on to a “myth” that more passengers would travel in their vehicles if they are made attractive.

The Divisional Commander said it would be unprofessional for ‘A’ Division  alone to take the buses off the road, and so the decision would have to be made by the Chief Traffic Officer

Bus operators, he said, have not been asked to repaint their vehicles in a specific colour such as green.

Minibus operators on Thursday, speaking with reporters at the Square of the Revolution -1763 Monument ‘Cuffy’ Square- complained bitterly that it would be too expensive to respray the buses because already they had spent up t GY$200,000 to ‘wrap’ their buses. They said that would be added costs in addition to daily expenses and repaying loans.

“We can’t go and find two-hundred thousand dollars now to paint over our vehicles and we haven’t gotten a grace period. If they give us a six months grace period, we could spray over back our vehicles,” a bus operator told Demerara Waves Online News

A bus owner said his bus was ‘wrapped’ one year ago, and since then he had been driving his vehicle unhindered.

A number of buses were pulled off the road on Monday and only returned to work on Thursday after a meeting with the ‘A’ Division Commander.