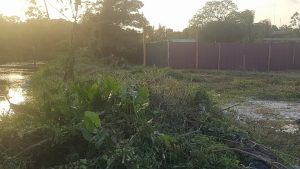 Guyana’s Lands and Surveys Commission (GLSC) on Saturday warned persons encroaching on government reserve near the Lama Canal that legal action would be taken if they do not remove their structures.

Commissioner/Chief Executive Officer of the GLSC, Trevor Benn said his entity has been informed that several residents of  Jacaranda Avenue, Bel Air Park, have been “unlawfully occupying”the  Guyana Water Incorporated’s (GWI) reserve that runs along the back of their property.

“GLSC calls on all such residents to immediately desist from the unlawful occupation of the Government Reserve and return their fence to their surveyed boundaries,”  Benn said. “Failure to do so will result in legal action being taken against the perpetrators.”

He said residents have been notified several times but none of them has responded. He said the latest notice was dispatched Saturday morning.

Benn noted that several years ago, a resident obtained prescriptive title on the grounds that he had been occupying the land for 12 years “so we can’t do anything about that person”.

Chief Executive Officer of GWI, Dr. Richard Vanwest Charles told Demerara Waves Online News that his company’s lawyers are in touch with at least one owner. “We are looking at one case in particular in terms of where the fence is going and we er decision with the owner,” he said.

When contacted, political activist for the People’s Progressive Party Civic, Peter Ramsaroop said he has not authorised any construction works at his property and he was unaware of an extension of his fence.

He said he inherited prescriptive rights from the previous owner of the property, but when he was asked two years ago- shortly after the coalition-led government came to power- to remove his fence 10 feet inward, he instead took it back 20 feet.