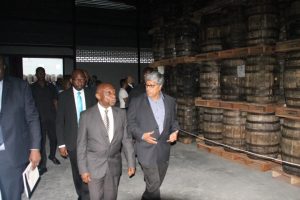 Demerara Distillers Limited (DDL) and government are expected to open negotiations later this year on the possible takeover of the Enmore-East Demerara Estate for the production of molasses.

That announcement was made by DDL Chairman, Komal Samaroo Friday at the commissioning of a GY$340 million rum-ageing warehouse at the conpany’s operations at Diamond East Bank Demerara,

“We have come to a meeting of the mind on an agreement for  the rest of 2018 to harvest standing cane in the fields and convert it  to inputs for the rum  production so that we continue producing throughout the year and by the time NICIL (National Industrial and Commercial  Investments Limited) would have completed its process of valuation we should be in a position to negotiate and to have discussion on  a more sustainable solution going forward,” he said. That negotiation is being done by the United Kingdom-headquartered company, PriceWaterhouseCoopers.

The Special Purpose Unit of NICIL, according to Samaroo, have agreed on a formula for harvesting sugar cane at all of the closed estates for the production of molasses for use in rum production during this year. A company official later told Demerara Waves Online News that about GY$900 million would be paid in tranches to government’s Special Purpose Unit of the NICIL in keeping with periodic production until October, 2018.

The closed estates are Skeldon, Rose Hall-Canje, Enmore and Wales. He remarked that the downsizing of Guyana’s sugar industry poses an “immediate and serious challenge” but DDL as working with NICIL, Guysuco and government to “come up with short-term responses and long-term sustainable solutions”.

Demerara Waves understands from reliable sources that if DDL eventually takes over the Enmore- East Demerara operations, private cane farmers would be responsible for planting and harvesting canes from which molasses would be produced for that company’s growing share of the international premium rum market.

If that formula does not work well, sources said Guyana would for the first time have to import molasses at the right price and quality to sustain rum production.

The rum-ageing warehouse, which was commissioned Friday, was built on one acre of land on which the Diamond sugar factory was once located. The land was acquired almost 20 years ago by DDL with the idea of centralising liquor operations. Samaroo said when the warehouse is filled with casks of rum to capacity, the facility would be valued more than US$10 million.

“This project is very strategic to the continued growth of DDL,” he said. The DDL boss announced that an agreement was finalised with the SPU to acquire more land to build additional warehousing facilities.
Samaroo noted that there is growth potential for premium plus rums which have registered a 40 percent increase or 2.2 million cases from 2011 to 2016. Apart from vodka, scotch and American whiskey, only 7.7 million cases are rum, showing there is a lot catching up to do.

2018-03-16
Denis Chabrol
Previous: One of the persons killed by police had no brushes with the law- Crime Chief
Next: Police ease brakes on ‘wrapped’ minibuses