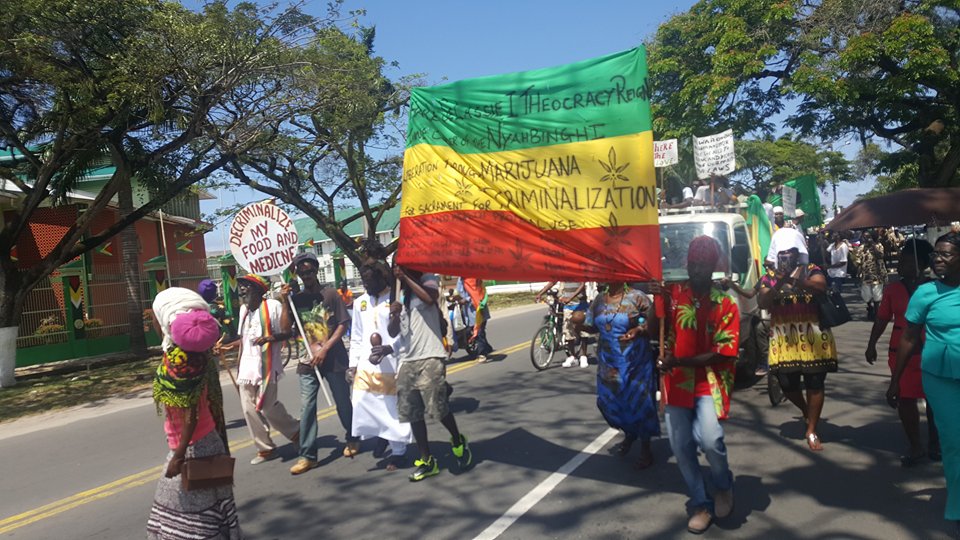 A section of the march outside the Ministry of the Presidency

Rastafarians on Monday walked twelve miles from Buxton to Georgetown to pressure government to decrminalise the possession of small amounts of marijuana for cultural and religious reasons, and said they were preparing to take their case to the constitutional court.

The Society for Marijuana Advocates for Reform and Treatment (SMART) plans to meet shortly with the Rastafarian community to see if “we can together make a case out of this.” “We feel that if it is challenged in court, there may be a case for it to be overturned. We are saying that if it is this government doesn’t do what is necessary by enabling legislation to be tabled, we will have to go to court,” said Ras Leon Saul of SMART.

Saul, who is one of the well-known marijuana lobbyists, warned that if government did not budge and the Psychotropic Substances and Narcotics Act was not amended, the governing APNU+AFC coalition could lose support at the next general elections constitutionally due in 2020. “The last election, the government won by one seat. Our community and the marijuana-using community in general- that’s two seats we are talking about easily- which means that if we are serious about changing the system of things, we have the balance of power,” he said. Saul noted that the people of Linden and South Georgetown, who do not normally vote cast their ballots in the May 2015 elections, and so “we have the power in our hands to make a difference and that’s why we are flexing our leverage and let the system know that there are enough votes in our community to make a difference,” he said.

Before the hundreds of persons, who participated in the march, converged at the 1763 ‘Cuffy’ Square of the Revolution they stopped briefly outside the President’s Office and waved placards and played drums.

At the Square, many of the participants openly lit what appeared to be and smelled like marijuana in the full view of uniformed police.

It is now more than two years since Alliance For Change (AFC) member, Michael Carrington’s proposed amendment to  Guyana’s anti-narcotics law has been on the National Assembly’s order paper but it is yet to be debated. Minister of State, Joseph Harmon has already ruled out softening of the laws that criminalise the possession of even two ounce of marijuana.

A Commission of Inquiry into the 2015 fiery disturbances at the Georgetown Prison that killed 17 prisoners has recommended that no one should be jailed for possession of drugs including small amounts of marijuana for personal use,

Caribbean Community (Caricom) leaders are next July expected to received a report from a fact-finding Commission they had appointed to examine the pros, cons and other implications of criminalisation of marijuana across the region.

Jamaica is among a small number of Caribbean nations that have decriminalised the possession of small amounts of marijuana for cultural, religious and medicinal purposes.