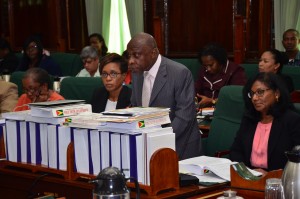 Minister of Foreign Affairs, Carl Greenidge on Thursday defended government’s more than one year secrecy of a US$18 million signing bonus from ExxonMobil, saying that publicity about the deal could potentially have serious implications for Guyana in relation to the border controversy with Venezuela.

He told reporters that now that details about the signing bonus have been disclosed, Venezuela was now aware of how much has been allocated for a legal battle, and the type of lawyers that could be hired.

By Greendige’s account, eyes were set on a signing bonus as far back as 2015 and negotiations completed in June 2016, as had been advised by the Minister of Natural Resources, Raphael Trotman, and  the full Cabinet approved the terms negotiated and the arrangements to receive the funds. However, Greenidge said not all Cabinet members were informed about the planned use of the money.

“Given the purpose for which the funds were to be used, and its implications for national security neither the President nor the Ministry of Foreign Affairs saw any merit in advertising the matter. In fact, so great was the concern that only those who needed to know were informed as to the purpose of the deposit,” he told the National Assembly in a statement on the controversy that has been raging for several weeks now.

“If you want something to be kept reasonably secret, then you don’t tell many persons,” he later  told a news conference.

At the same time, Greenidge said, “nothing about the levy was either particularly secret or illegal. Many agreements are approved during the course of any year without being announced.”

Greendige  said US$15 million would be spent on legal fees in connection with the Guyana-Venezuela border controversy and US$3 million on training for the petroleum sector and engineering.

He said none of the money has been spent so far until a team is hired to represent Guyana at the International Court of Justice (ICJ).

The Foreign Minister explained that the money was deposited into an escrow account at the Bank of Guyana where it is being held “separately and securely until such time as we were clear as to when it would be needed on the advice of the Ministry of Foreign Affairs. “Out of concern that adequate funds may not be available from the general budget — i.e. the Consolidated Fund — when it was time to pay for these critical services, the Minister of Foreign Affairs, advised the President that arrangements be made to set aside sufficient funds to make the payment when needed. More specifically he asked that US$15m of the sum received by the Government from the ExxonMobil exercise be earmarked for this purpose,” he said.

He said Guyana decided to use the signing bonus mainly for the territorial matter because the treasury is strapped for cash and at times had been unable to pay its legal team promptly. “There have been times in 2016 and 2017 when we were unable to make timely payments to the legal team advising the Government. This is an undesirable situation. It is the responsibility of the Minister of Foreign Affairs to make sure that payments for services contracted by the MoFA are made according to the terms of the contract.

The MoFA had an eye on events due in 2018 and, in particular, the need for funds to pay the enlarged team of lawyers that would be required should the UN SG honour his commitment to refer the Guyana case to the ICJ [International Court of Justice] without further procrastination after December 2017,” Greenidge told the House.

The former Finance Minister in the then People’s National Congress-led government up to 1992 said noghing was wrong with holding cash in separate accounts for special purposes.  Greenidge stopped short of criticising Auditor General Sharma for saying that he would probe why the money was not put into the Consolidated Fund.

The Foreign Minister announced that there was legal room under the Fiscal Management and Accountability Act for the processing of the funds into the government’s accounts.

It was also agreed that US$3mn be set aside for the funding of urgent training of Guyanese in needed skills such as engineering and petroleum geology.

Saying that monies can be held in separate and different accounts outside the Consolidated Fund, the Foreign Minister appeared to refer to accusation by the opposition People’s Progressive Party that government had been setting the stage to steal the US$18 million. “It is therefore inconceivable that in such circumstances, Cabinet Ministers and Ministers Trotman or Jordan, in particular, were supposed to be or were the beneficiaries of the funds and that such an arrangement could be expected to be a secret,” he said.

He reasoned that if  a plan had been hatched to siphon off the money, government would not required the authorization by five of the country’s most senior financial officers to permit withdrawal of the funds from the BOG (Bank of Guyana).