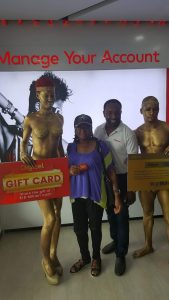 Competition in Guyana’s mobile phone market on Saturday continued to heat up for the Christmas season with one of the country’s two major phone companies announcing that it has set aside GY$18 million in prizes and also holding a fun-day for orphans at the several children’s homes.

“On December 13 rather than the usual Christmas visit to children’s Homes we will be hosting the kids to an action packed day of events. It’s expected to be a day of fun and frolic that will include games, performances by various artistes, face painting, an assortment of light refreshments, go kart rides and the ever popular bouncy castles. Best of all Santa will be on hand to share his special Christmas spirit,” the phone company said Saturday.

Gregory Dean, Digicel’s CEO, said of the various Christmas initiatives, “We want to connect to our customers this Christmas in ways that meet their needs and also instantly reward new customers to Digicel. From our cash prizes to our discounts on handsets, it’s been about deepening our relationship with them by adding further value to what we already offer. We are also excited about the Santa Express and spreading Christmas cheer with a twist this year with the deserving girls and boys.”

Digicel (Guyana) described its offer as a “whole lot of gift-giving”, saying that a “very generous ‘Santa’ has decided to share the gift of $18 million in cash with lucky customers.

Customers just have to spend $3,000 or more at any Digicel store and they will be given the opportunity to choose a ‘Golden Ticket’. Customers may also top up, buy a handset or pay their postpaid bill to get a coveted ticket. The ticket has a scratch off section, which when actioned, reveals the cash prize of either $1,000, $2000 or $5000 that can be redeemed immediately in store. More importantly, with this promotion that runs throughout December 2017, every eligible customer is a winner!

For customers who want to gift their loved ones, or themselves with trendy handsets that won’t break the bank, Digicel is the place to shop this Christmas. Customers will enjoy up to 50 per cent off on selected devices, and Digicel will seal the deal for them by gifting them a monthly data bundle inclusive of three gigs of free data. New customers, who purchase a SIM card, will also receive three gigs of free data which will automatically be added to their purchased data plans equally over 3 months starting immediately in December and ending in February.

Digicel Group is a total communications and entertainment provider with operations in 31 markets throughout the Caribbean, Central America and Asia Pacific. Digicel also runs a host of community-based initiatives across its markets, including Digicel Foundations in Haiti, Jamaica, Papua New Guinea and Trinidad and Tobago which focus on educational, cultural and social development programs.