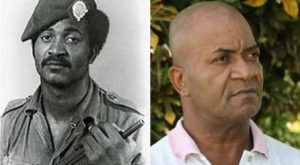 According to several reliable sources the body of the 61-year old, was found around 10 o’clock local time and subsequently police were called to investigate. Rozendaal’s left arm was cut with a razor blade and a doctor has determined death as a result of blood loss. On 30 October when he appeared in court again, military prosecutor Roy Elgin sought a jail term of 10 years for the former army officer.

According to the prosecutor Rozendaal had participated in the planning and extra judicial killing of fifteen political opponents of the then military government on December 8, 1982. Elgin argued that there was a script for the December murders, and that this suspect had a specific role in it. His job was to collect two men one of whom, former Sports minister André Kamperveen, was executed in then military headquarters Fort Zeelandia. Rozendaal was also the army officer who had blown up and set ablaze the head office of Suriname’s most powerful trade union at the time, De Moederbond. Due to his cooperation during the trial the prosecutor sought a 10 years jail term.

After the court hearing Rozendaal , who had expected acquittal, was shocked and became very emotional. He noticed that as a soldier he merely followed orders from his superiors. “If I didn’t obey maybe I would have been the sixteenth person who would have been killed”, he told the military court during an earlier hearing. He said that he didn’t know that the men he was sent to arrest would be killed. “I’m not going to be able to bear this, it hurts and maybe I have to sacrifice myself so that society will believe that Rozendaal didn’t participate in the planning and was not present during the killings,” he said in an interview with journalists on October 30. “And no one should blame me, it will be my will,” he added alluding to his suicide. Exactly one month later his lifeless body was found with his left arm slit with a razor blade.

Against Bouterse and five co-defendants the prosecutor sought a 20 years sentence and for ten others acquittal. It is widely expected that sentencing could be no earlier than mid-2018. Since Bouterse became president of Suriname through democratic elections in 2010 he tried several times to stop the trial. Notorious were the Amnesty Law in April 2012 and in June 2016 he invoked article 148 of the Constitution which give the government certain power to instruct the prosecutor general to stop a criminal trial. Both attempts failed since the High Court ordered that the December Murder Trial should continue until there is a verdict.

Through the years Bouterse maintained that he didn’t shoot anyone and that he didn’t order the killings. He also said that he wasn’t present in Fort Zeelandia when the men were executed. Rozendaal was the only co-defendant who said in court tha Bouterse was present and that he shot and killed army officer Soerindre Rambocus and union leader Cyrill Daal. “Desi Bouterse himself shot Cyrill Daal and Soerindre Rambocus. He (Bouterse) was my best friend and on numerous occasions we talked about the December murders. I was his confidant. Bouterse can be compared to the Godfather”, Rozendaal said in March 2012. He also claimed that Bouterse was present when the fifteen men were killed. “I’ve seen corpses at half past six in the morning on December 8th. He (Bouterse) lied to us that the men were planning a coup and that’s why they were arrested. I believed him then, but it turns out that this was not true. This was not a military operation. They were just brutal and cowardly murders. The people were seized from their homes and transferred to Fort Zeelandia. These persons were treated like beasts”, he added.

Rozendaal was one of the so-called ‘Group of 16’ young army officers who toppled the Henck Arron administration during a coup on February 25, 1980 after a dispute between the government and military personnel who were seeking to establish a trade union escalated. The ‘Group of 16’ led by Desi Bouterse remained in power behind the scenes until the general elections on November 25, 1987. The December Murder Trial with Bouterse as the main suspect began on November 30, 2017. A total of 25 former military officers and civilians were charged with the murder of fifteen men including journalists, military officers, union leaders, lawyers, businessmen and lecturers.