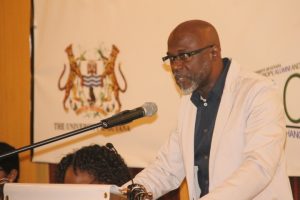 Guyana’s oil revenues should be used to finance the development of renewable energy sources and cash normally spent on fossil fuels should be fund systems that can resist the impact of climate change, say top local and regional officials.

“Anticipated earnings from the oil and gas sector should fund Guyana’s transition to a ‘green economy’ and provide a mechanism for a greenhouse gas set-off to compensate for greenhouse gases emanating from this sector,” Presidential Adviser on the Environment, Retired Rear Admiral Gary Best told a University of Guyana (UG)-organised forum titled “Climate Change: The Guyana Imperative for Prospering in a Climate Altered World.”

He said Guyana would require significant “obligated” public and private financing to address climate change adaptation and mitigation. Best noted that Guyana was on track to ensuring that sufficient funds are made available in this regard, “given the endless debate on what constitutes new and additional financial resources.”

He argued that climate adaptation measures do not yield significant profits and climate financing institutions have not provided new and additional cash, as mandated by the United Nations Framework Convention on Climate Change, causing many countries count overseas development assistance as climate finance contributions.

Best also took issue with the recently introduced  insurance mechanism to cover most vulnerable persons against the the “most adverse” effects of climate change. “This is now an insurance mechanism driven and controlled by the developed countries. It is not new and additional climate finance. This is another control mechanism and deviation from public funding of adaptation efforts,” he said.

He noted that an Adaptation Fund, which should have been funded by public funds as a key adaptation bank, has been overtaken by a Green Climate Fund now being capitalised through significant private sources. 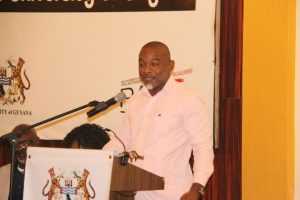 other Caribbean countries should not depend need to generate a renewable energy plan that could allow them to divert a lot of their fossil fuel expenses to developing infrastructure and other systems that can resist the impact of climate change.

Gardner he said Guyana has the capacity to produce bio-energy at 12-13 US cents per kilowatt hour, solar energy and small hydro-power stations. “A system that is properly planned and a system that is suitably designed can in fact just not just mitigate greenhouse gas emissions but really derive a greater benefit, that of adaptation,” he said.

Gardner agreed with Best that the region could no longer depend on the international community to pay for climate adaptation. “We must find ways of means of being able to raise resources from within our internal structures that can support some of our adaptation plans and the place to find much of those resources is in the energy sector because the energy sector is where most of our economies bleed,” the Caricom Secretariat official told the 10th Turkeyen Tain Talks named after UG’s campuses in Georgetown and Berbice.

The Caricom Programme Manager on Energy noted that energy costs are up to 29 percent of Gross Domestic Product (GDP) in some countries, and in the case of Guyana, energy imports last year accounted for 24 percent of GDP.

He also highlighted the vulnerability of the Caribbean to higher oil prices as a result of hurricanes that slam the Gulf of Mexico, further depleting the region of much needed foreign exchange that should be spent on social sector development, salaries and develop infrastructure that could withstand the effects of climate change.  “If the system is properly designed, those numbers can in fact go down to the extent where much of that money that is being spent on energy imports could be channeled elsewhere to design the kind of agricultural systems that are more adaptable to climate change to improve some of the coastal infrastructure to make them more resilient to climate change to the flooding that is likely to come and to the countries of the Caribbean where hurricanes are obviously an issue,” he said.

Government intends to next year install more panels on 74 additional buildings and an additional 10,610 lamps and 1,486 motion sensors, all of which Jordan said could save taxpayers GY$45.5 million per year in energy costs.