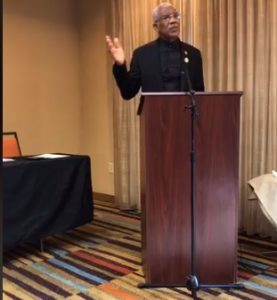 President David Granger has labelled as “vulgarians” opposition People’s Progressive Party (PPP) parliamentarians, in his first public reaction to their drowning out of his address to Parliament by heckling as they held up placards.

Addressing  the 5th Biennial Conference of his People’s National Congress Reform – North American Region – being held this week in Atlanta, Georgia, United States, he remarked that he was glad to be there two days after his speech, titled ‘The Common Good’ was rendered “inaudible” by the “noisy people”

“Another good reason for me to be here, as I said last night, is that I need to take refuge from the vulgarians….the vulgarians can get you down and you come under severe attack. It’s good to be among friends. Look at here, no placards and I can speak without interruption,” he said in clear reference to last week Thursday’s occurrence.

The Guyanese leader lamented that the Thursday, November 2, 2017 “was a day of infamy in the annals of the parliamentary record of Guyana”. “It will go down as one of the most disgusting episodes of parliamentary misbehaviour,” he said.

House Speaker, Barton Scotland did not pronounce on the behaviour of the PPP parliamentarians, but it is likely that he might do so when the National Assembly meets again later this month.

The PNCR leader, who has been a party member for 52 years, said he was even more convinced that no other political party, including the PPP, could run Guyana. “No other party at this time or in the future can give Guyana the quality of leadership…” he said. “Another reason why we are here today is because more than ever I am convinced that the PPP does not deserve to run the government of Guyana. It’s disdain for democracy, it’s contempt for culture…,” he added. General elections are constitutionally due in 2020, the same year that United States oil giant, ExxonMobil, is expected to begin commercial oil production offshore Guyana.

Clearly mocking Opposition Leader, Bharrat Jagdeo who held a placard in the House with “divide” spelled ‘”devide”, he said. “The PNC is the face of the future. We are what Guyana looks like, not the people that you saw on Thursday. We can spell,” he said.

Granger declared that his party is the “conscience of the country” and it could not afford to be corrupt or crooked “because the people look to us for guidance and for leadership”.

The PPP has justified its unprecedented protest against a President inside the Parliament, saying that was necessary to make a statement about its concerns about Granger’s unilateral appointment of Retired Justice James Patterson as Chairman of the Guyana Elections Commission to the international community whose envoys were in the Chamber as special invitees.

Chief Justice Roxane George- Wiltshire is later this month expect to hear a case brought by the PPP challenging the constitutionality of James’ appointment on several grounds including the rejection of Opposition Leader, Bharrat Jagdeo’s 18 nominees.

Unlike those nominees, Granger has said that he has, in accordance with Guyana’s constitution, deemed Justice Patterson “fit and proper” to be appointed GECOM Chairman.

2017-11-04
Denis Chabrol
Previous: City’s major garbage collectors to be finally paid
Next: Guyana President limits movement in the US because of security threat