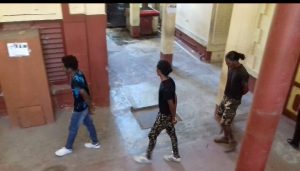 The three murder accused going to the police lockup shortly after they were arraigned for the murder of Constance Fraser and Phyllis Melrose Caesar between on October 2 and 3, 2017

Three men were Wednesday charged with the murder of two elderly longtime friends at their home earlier this month.

The charge read that between October 2 and 3 at South Road and Albert Street; they murdered  88-year old Constance Fraser and 75-year old Phyllis Melrose Caesar between  October 2 and 3, 2017 in the furtherance of a robbery.

The court heard from the police prosecutor that the post mortem examination is outstanding and as such Chief Magistrate Mc Lennan refused bail and the trio was remanded until October 26.

Their court appeaeance followed last weekend’s arrest of the suspected mastermind-Khan- at Pomeroon following an intelligence-led operation. Police had said the two others had already confessed to committing the offence

The women were due to be buried the same day the murder accused appeared in court for the indictable offence.

Autopsies showed they died from manual strangulation and blunt trauma.

Their home, located on the same corner opposite the Full Gospel Church, was badly ransacked, an indication that the intruders had spent a long time in the building.

Church members entered the building on October 3 after Caesar failed to turn up early on the morning of October 3 to open the church.

On entering the house, the women were found with their hands, feet and mouths tied.

2017-10-11
Writer
Previous: What are your plans? Granger blindsided at business conference in push to re-balance of economy
Next: West Coast Berbice man severely burnt in Bushlot mystery fire