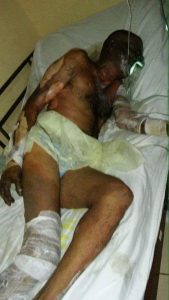 The fire reported started in the lower flat of the home.

The injured man is . His sister, Indira Sahadeo, who also resided at the home told Demerara Waves Online that she was not at home at the time of the fire, but at around 12:30 pm on Tuesday evening, she was alerted to the fire by neighbours.
“The neighbour holler for me saying they get fire and I run out the house, but it was too late. They did done carry he hospital,” the woman recalled.
According to the woman, the house had no electricity so she could not ascertain a reason for the fire since it was not the norm for candles or lamps to be used in the home.
“We does live downstairs, me and he. Upstairs don’t use lamp and we don’t so I can’t say what start the fire,” a baffled Indira said.

Meanwhile, neighbors stated that the fire service arrived on the scene about 30 minutes after but the entire house was already gutted. The neighbours also 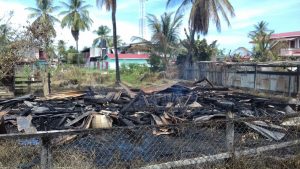 The smothering remains of the house at Bushlot village, West Coast Berbice.

complained that the fire tenders arrived with no water.

The man is currently at the New Amsterdam Public Hospital where he is said to be in a stable, but serious condition.
Investigations are ongoing.