What are your plans? Granger blindsided at business conference in push to re-balance of economy 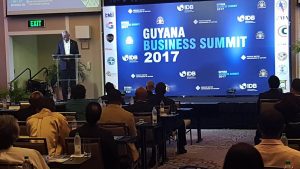 President David Granger addressing the opening of the Business Summit organised by the Private Sector Commission and the Inter-American Development Bank.

President David Granger delivered the keynote address today at the opening of the two-day Guyana Business Summit, but not before the Private Service Commission (PSC) rolled out a laundry list of items which the business sector needed clarity on.

PSC Chairman Eddie Boyer’s remarks, which were delivered by the PSC’s Deodat Indar, called on the president to clarify government’s approach to economic development, taxation policy, an incentive program for business, plans to strengthen  democracy and ensure the rule of law is maintained.

The PSC Chairman’s remarks pressed the President for plans to develop the quality of life for all citizens and also how government intends to work with the private sector to create jobs  for young and under-utilized population.

“In addition, Your Excellency  can provide direction on the oil and gas sector on areas where we will spend revenue from the expected wealth deriving from royalties. Since Government is the biggest spender, this will assist the private sector, where and when to invest, in order to be an anticipated recipient of government contracts. I also would like His Excellency to address what are his plans to address the prison system and wider security issues in the country that cause businesses to be on the edge due to the level of robberies and other crimes experienced in the country,” Boyer stated.

President Granger stuck to his prepared speech, calling on private sector businesses to join government’s plan of providing a ‘good life’ for all Guyanese while incorporating small and medium size businesses in the overall plan to drive future development.

“The economy is being re-balanced also by investing in the development of micro, small and medium-size enterprises which constitute half of the economy and is expected to contribute about 30% of GDP (Gross Domestic Product). The Government sees development in a holistic way. Horizontally, across all 10 regions and vertically from the household right through to the big corporations,” President Granger told the gathering.

In the past, the now more than two-year old APNU+AFC-led government had blamed drug trafficking, gold smuggling and corruption as reasons for heightened economic activity under the then People’s Progressive Party Civic (PPPC)-led administration which lost power for the first time in 23 years in May, 2015.

He said that farmers and fisher-folk must be part of gatherings such as the Guyana Business Conference. President Granger assured that Government supports the private sector.

The conference, which is supported by the Inter-American Development Bank (IDB) is being held under the theme, ‘Challenges and Opportunities for Business Growth and Development’.

The opposition People’s Progressive Party (PPP) has said its representatives would attend the forum and challenge government on a range of issues including procurement, the oil and gas sector, among others.

The IDB recently said it was providing government with assistance to examine the viability of establishing a special unit to implement multi-million dollar projects and programmes. Finance Minister, Winston Jordan has said the Public Sector Investment Programme has been performing poorly, partly resulting in slow  economic activity.

2017-10-11
Writer
Previous: Remote community in Guyana to be powered by solar energy
Next: Three charged with murder of elderly women