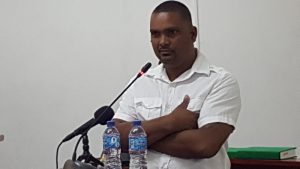 Nizam Khan on the witness stand at the Commission of Inquiry into how effective the Guyana Police Force had investigated a report of an alleged assassination plot.

An East Bank Demerara businessman on Monday denied that he ever offered GYD$6 to GYD$7 million to a barber in the neighbourhood to kill President David Granger, but disclosed that he had lent the man money in the past.

Khan recalled that in the past he had loaned GYD$1 million to Guillard who repaid GYD$500,000 and then they ceased communicating in 2014 until around 2016 when he (Guillard) asked him for his battery. Then, he said Guillard had asked him to borrow GYD$800,000 to start a taxi service and he would have repaid him in installments of GYD$70,000.

Guillard is on record as saying that he had asked Khan to borrow GYD$6 million, but Khan allegedly showed him a long gun and told him that he could instead get GYD$7 million if he killed the Guyanese leader. However, Khan said he did not have a long gun or ever applied for one. He said the only firearm he has is one .32 Taurus pistol.

The businessman further informed the Commission of Inquiry that he only knew that his brother owns one .45 pistol from media reports and he did not know that his sibling also owns one shotgun and one rifle.

However, Khan told the Commission of Inquiry that since their  disagreements, Guillard had been lying on him and had even reported to police that he had stolen radio sets and had even threatened to shoot him.  “I never pick up no radio set or pick up a gun. You accusing me wrongfully. You get like he, doing that to me too,” he told Attorney-at-Law, Selwyn Pieters who is representing the interest of television journalist, Travis Chase. Khan said at one time Guillard even told his brother that he was having sexual relations with his wife.

While Commissioner of Police, Seelall Persaud  earlier Monday said he had offered an opinion on the granting of bail to Nizam Khan on March 29, 2017 after statements had been taken and a confrontation held, the businessman said he did not know who had granted him bail. He recalled that a “police lady” told him that he was on bail. Persaud said he had also suggested to one of the investigators that Imran Khan, who was accused of disorderly behaviour at the Headquarters of the Criminal Investigations Department , be released on his own  recognizance since he did not have GYD$10,000 to post cash bail.

He said his licensed pistol and firearm license were taken by police on their arrival were taken away by police on arrival at his home at Diamond, East Bank Demerara and returned to him after he was released from custody.

Nizam Khan sought to distance himself from his brother, Imran, who is a friend of Police Commissioner Persaud. Nizam said he often keeps in contact with his brother by telephone every week.

Nizam said Khan said while he had been giving a statement to investigators, he saw Imran Khan who had expressing concern that no one had been taking his report and that he had wanted to do so at the Office of Professional Responsibility.

Nizam did not know if his brother had called the Police Commissioner or the top cop had done so.

In terms of connections with the Guyana Police Force, Nizam Khan said his brother would often refer police vehicles to him to be repaired but he never handles the cost of such work.