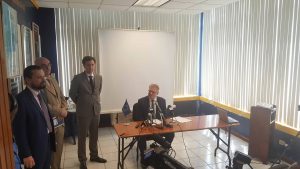 EU Ambassador to Guyana, Jernej Videtič (seated) and other top officials briefing the media at the EU Delegation’s Office.

The European Union (EU) on Thursday ruled out doling out more money to Guyana’s ailing sugar sector, and said it has received no request to conduct a study on producing ‘plantation white’ sugar to supply Caribbean consumers of imported refined sugar.

“There are no more funds from this protocol. This is it,” EU Ambassador Jernej Videtič told a news conference.

Between 2006 and 2017, the EU provided a total of GYD$348.5 billion in budgetary support to Guyana to compensate for the 36 percent cut in preferential market price. The World Trade Organisation had ruled that the preferential market access violated global free trade rules.

In the coming months, the EU’s sugar trade will be further liberalised with more availability of beet sugar; a move that experts say will result in an overall decline in world sugar prices.

The Chief Executive Officer of the Guyana Sugar Corporation (Guysuco), Errol Hanoman on Wednesday told Demerara Waves Online News that the state-owned sugar entity wants the EU to assist with conducting a technical study on the feasibility of producing plantation white sugar. “At the moment, we are trying to get a special team to be paid for by technical assistance from the EU to help us with this study and I am hoping that this study will start in July and we will have the results by October/ November,” he said.

Hanoman hopes that the cost of converting the facilities to produce plantation white sugar will be less than the cost of building a brand new refinery.  That expectation comes against the background of government-appointed investment-broker, Wesley Kirton, saying that a number of major foreign investors are examining the possibility of building a sugar refinery in Guyana as part of a partial or whole takeover of the industry.

Hanoman explained that the study would focus on the layout of the Albion factory, equipment required, the process  involved in producing plantation white sugar and the amount of money required.

However, the EU Ambassador said “I am not aware of this that we will be involved in anything like that.”  Head of Cooperation at the EU mission in Guyana, Christof Stuck said ” in theory it’s possible on request of the government. However, we haven’t received such a request so that’s not an issue now for us.”

The Guysuco CEO said sugar executives at two meetings so far for the year have decided that regional sugar producers- Belize, Guyana, Barbados and Jamaica- must take steps to fully satisfy the 300,000 tonne annual demand for the sweetener. Of that amount,  200,000 tonnes are refined sugar being imported from outside the region.