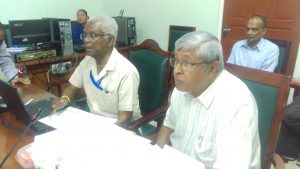 “The main worry with the extent to which the price is dropping is going to be its impact on our cash flows which is a chronic problem,” he told Demerara Waves Online News. Top Guysuco executives earlier this week began examining the impact the price reduction might have on the loss-making entity.

While Guysuco hopes to rake in some cash from sugar produced during the second crop that is due to start in mid-July, the Guysuco CEO said attention would also be paid to the market mix of the “better priced” local and Caricom markets. Due to the amount of the sweetener expected to be produced in the second crop, Hanoman said “we would have no choice but to put a significant tonnage on the EU (European) market where the price is no different from the world market.

Figures released by Guysuco on Wednesday state that the corporation supplies annually, 65,000 tonnes of bagged and packaged sugar to Caribbean and local markets. Another 12,000 tonnes of raw sugar is supplied to the North American market while the remainder which is also raw sugar, is sold on the European market. The supply to Europe for the Second Crop 2017 will total some 70,000 tonnes.

Hanoman said management was considering its overall production target against the ability to pay wages and purchase essential inputs.  Guysuco is producing sugar at an estimated 30 US cents per pound and selling it at about 12.66 US cents as of Wednesday, June 28, 2017.

Albion and Blairmont are producing sugar at 26 US cents per pound, but Hanoman said with planned improvements over the next three years that production cost could drop to as little as 20 cents per pound.

The Corporation earlier Wednesday said over the past six months the World Market price for sugar has dropped significantly with a range of US$ 250 – 275 per tonne which is in the vicinity of 12.5 cents per pound (c/lb). Earlier this year, the price was US$396 per tonne.

Guysuco said the future looks bleak for the prices it can get for sugar because there will be a surplus of the sweetener for the 2017-2018 marketing year and more beet sugar will be available on the EU market.

“In addition, from 1st October 2017, the EU market will also see some radical changes since it is anticipated that significant additional amounts of beet sugar will be available for sale and this will compete directly with cane sugar. This may result in reduced sugar prices in Europe.

Due to the competition with beet producers, the price paid by the refiners for raw cane sugar (as supplied by GuySuCo) will be more in line with the World Market Price, which currently is trading at US$275 per tonne and the forecast is that it will not increase significantly in the near future,” stated the corporation.

Against the background of lowering prices, a fragile financial position and poor liquidity, Guysuco appealed to workers- mainly harvesters and planters- “to turn out and assist their estates to harvest all canes in the cultivations and maximize on sugar production.

Sugar-dependent communities were also urged to support the Corporation’s outreach drive to increase attendance on all estates for the Second Crop.