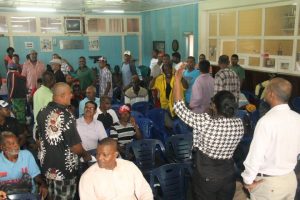 Hundreds of field workers of the Guyana Sugar Corporation (Guysuco) will lose their jobs if they refuse to work at Uitvlugt where efforts are being made to boost production, a senior company said Thursday at the end of a very disruptive meeting.

Chief Industrial Relations Officer at Guysuco, Deodat Sukhu said many of them have not worked during the first crop, and if they miss the second crop they would lose their job in keeping with the Collective Labour Agreement between the Guyana Agricultural and General Workers Union (GAWU) and Guysuco.

“If you don’t work two consecutive crops, you self-terminate your service. They have this last crop to give consideration to themselves. What I want to say is that the matter is before the court so it’s either termination by the court or at the end of this crop,” he said when asked by Demerara Waves Online News what would be the fate of the workers if they refuse to work at Uitvlugt.

Guysuco plans a job drive at Uitvlugt on July 5, 2017 to recruit interested persons from Uitvlugt and neighbouring communities.

Sukhu said of the 1,118 workers at Wales, 389 were severed, 301 have been kept at Wales and 375 others are being offered to work at Uitvulgt.  He said workers agreed to remain on staff and be transported from Wales to Uitvlugt, but one week later after meeting with a political activist the workers demanded severance pay before they are re-hired to work elsewhere in the industry. 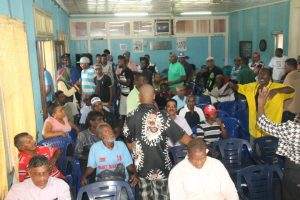 Sukhu said after the workers were told that they have about 17 years remaining of their working life and it would be better for them to agree to be transferred to Uitvlugt or be kept on the Wales employee registry and be transported to Uitvlugt, but one week later they changed their mind. “Lo and behold, the following Wednesday they had a meeting with a political activist or a political individual who told them that the current government must pay them off and they seek re-employment,” he said when asked by Demerara Waves Online News.

The Industrial Relations Manager said on average the workers would each be entitled to 38 weeks pay for 13 years which is less than one year’s pay, and so it would be unprofitable to be paid severance.

Sukhu said Guysuco has vacancies for 406 persons including 375 harvesters. He noted that 51 of the Wales harvesters worked at Uitvlugt during the first crop for an average of GYD$4,000 per day for 68 days. “The factory is still lucrative for them but they themselves could only answer the question why they don’t want to go,” he said.

Before the meeting began, workers converged outside the Wales Community Centre and complained bitterly that their wives were leaving them because they were not earning any money since last year December, 2017 when Wales was closed. They said several of them are entitled to GYD$2 million to GYD$3 million in severance. One of them contended that the working conditions at Uitvulgt are harsher than those at Wales. “To be truthful, what these people doin to we is more than advantage. This situation is worser than wha they used to do we before because they are actually forcing we to go to a situation whereby the condition is terrible bad. When I say it terrible bad, it terrible bad. It ain’t got no way Uitvlugt could compare with Wales backdam,” he said. He explained that when workers leave their homes 4:30 AM they arrive at the work site at about 10 AM and would be unable to earn a day’s pay.

“Number one, you have to do their work to standard and secondly some time you go there and cut the cane and lef it on the ground and by time time the punt reach, it is time to call off and you can’t load the cane,” he said.

The Industrial Relations Manager deemed “a myth” claims by sugar workers that if they go to Uitvlugt they would lose time during which they have to reap a certain amount of cane. He noted that the 51 workers who went to Wales earned an average of GYD$4,200 per day compared to the GYD$2,700. He said Guysuco has formally agreed to provide no less than 2.6 tonnes of cane. 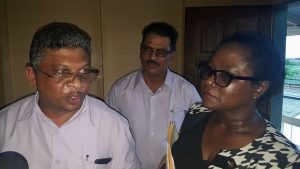 Guysuco had intended to meet with the workers at Wales Community Centre to discuss progress being made at Uitvlugt and to urge them to report for duty there. However, in less than half an hour the meeting descended into chaos when Wales Estate Manager, Devendra Kumar told the heckling workers that if they continued to misbehave either he or them would have to leave.

“Sir, if you will not allow this programme to go on, it’s either I leave or you leave,” he said. Immediately, the workers became incensed and began leaving the building.

Most of them immediately began walking out, but were convinced by Senior Communications Officer, Audreyanna Thomas to return and participate in the meeting.  A quick decision was taken to have Kumar abort his presentation on diversification of the Wales Estate.

While Uitvlugt Estate Manager, Yudhusthira Mana was delivering his presentation on the Uitvlugt Estate Improvement Programme, many of the workers continued to loudly demand that they be paid severance. “All we want is our severance,” and “pay us our money” and “we don’t want to hear all of that” were among the remarks made by the workers as Mana showed them pictures of improvements already made at Uitvlugt.

From the inception, Thomas stressed the need for two-way communication free from any disruption. After promising the vocal workers that she and the other senior Guysuco officials would listen to their concerns, in the end she called off the formal meeting because of the situation.

The Guysuco spokeswoman reiterated that the corporation is encouraging private cane farmers, who were supplying Wales with cane, to now lease lands to supply Uitvlugt to increase their cultivation from 1,500 hectares to 3,000 hectares. “The corporation is committed to ensuring that the Uitvlugt Estate Improvement Programme is a success,” she said. Guysuco says already sugar production has increased from 16,260 tonnes to 40,000 tonnes.