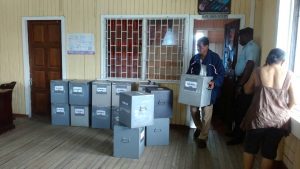 Ranks of the Guyana Police Force were Sunday (April 30) again called in to intervene in the elections process of the Guyana Public Service Union (GPSU) now in its fourth day, with the results of only seven of the 19 ballot boxes released.

An unofficial calculation shows that from the seven results posted Saturday night Gasper was at that time leading 542 to 155.

At odds was the placement of the remaining 12 locked boxes in an isolated room by GPSU Chief Elections Officer Herman De Souza, giving rise to concerns by members camped out, inside and outside of the union’s Shiv Chanderpaul Drive and Regent Streets Office. 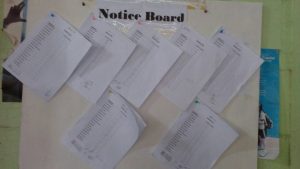 Some results of the GPSU’s elections posted at the union’s headquarters where votes cast in last Thursday’s elections were being counted up to Sunday. Official final results are due later this week, officials said.

De Souza Sunday attempted to lock the boxes in a room of the GPSU’s head office but members insisted the room is filled with unused ballots and that the move was only meant to pad the boxes with votes for incumbent Patrick Yarde—at the helm of the union for the past 30 years.

The police instructed De Souza to have the boxes remain in the open view of members and that the boxes should be taped up to preserve their integrity.

Concerned members camped out monitoring the process and belonging to ‘Team Change’ have since vowed to remain engaged to monitor the building after De Souza left for the day.

The members have also been unsuccessfully demanding the Statements of Poll for the unreleased locked boxes but De Souza insists the documents are in fact inside of the locked boxes.

According to De Souza, all of the counting has been completed and the tallying and release of the remaining information will be had by Wednesday.
According to information garnered by Demerara Waves, Yarde lost the votes in the West Brickdam area 39/16, Brickdam, 64/21, Guyana Revenue Authority’s wharves 44/24, the Palms, GGMC, Lands and Surveys and Ministry of Health 261/7, GRA’s Head Office 96/16.
Unreleased results for Georgetown Public Hospital Corporation shows Gasper in Command 62/30 and Bartica locations 58/7.

GPSU’s head office went to Yarde 16/29.
Gasper subsequently told Demerara Waves, “the whole process has changed since the first box assigned to be counted at the union was done and the numbers were in favour of me and the trend showed that his slate was more prominent with me being elected as the President.”

He said based on the intial results the supporters of Yarde have been trying to frustrate the system.
“That trend reflects that people do not have problems with his slate but with him,” Gasper said.

He said ever since the close of polls on Thursday all of the other boxes from the outlying regions should have been tallied and the results made known and Statements of Poll prepared.

Only the Georgetown boxes should have been counted at the Union headquarter’s according to Gasper.
“To date we are still awaiting the statement of polls for the nine boxes from the outlying regions and the statement of Polls from GRA and GPHC.
“Three days later the elections officer said he doesn’t have the Statements of poll,” according Gasper.

With regard the calling in of the police, Gasper told Demerara Waves it was nothing but intimidating tactics employed by supporters of Yarde and De Souza in particular.

He told Demerara Waves, “as you would have noticed the trend of the seven boxes that have been counted, he has only won at one ballot station where it was reported that the persons assigned there to work were doing a bit of padding….his win at this election is what I will not be accepting.”

Gasper said he is still very wary of the process and he believes that there are still attempts being made to compromise the elections results.