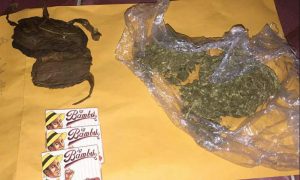 The marijuana and packets of Bambu rolling paper that were found in the possession of a prison warden Tuesday night (March 28, 2017). (photo from Gladwin Samuels’ Facebook).

A prison warden attached to the Georgetown Prison was Tuesday night arrested after he was allegedly caught attempting to smuggle a quantity of marijuana, Director of Prisons, Gladwin Samuels said.

Demerara Waves Online News was told that the warden, who has three years of service, left the jail to purchase food but when he returned a search was conducted and the marijuana and other items were found in his possession.

The marijuana is said to be about 113 grammes. Three packs of Big Bambu rolling papers were also seized.

Samuels lamented on his Facebook page that employees of the Guyana Prison Service are being held allegedly involved in illegal activities when they should instead be part of the process to rehabilitate inmates.

“Word seems to be falling on deaf ears. Everyday, officers are reminded of their roles and functions. They are reminded why we are employed in the capacity we are. However, all the talking, preaching and praying seems not to be working,” he said.

He urged an end to “this situation” if the Guyana Prison Service is to aid in rehabilitating offenders.

The Guyana Prison Service plans to install scanners at a number of the prisons to help prevent illegal items from being smuggled into cells.