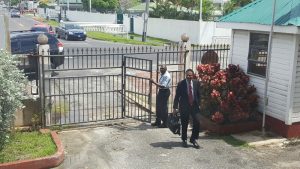 Attorney General and Minister of Legal Affairs, Basil Williams entering the Court of Appeal compound for the ruling on presidential term limits.

Guyana’s Court of Appeal on Wednesday, by a 2 to 1 majority, ruled that presidential term limits is unconstitutional.

Attorney General  Basil Williams says the State will appeal the decision to the Cariibean Court of Justice within 30 days.

Justice B.S. Roy and Chancellor of the Judiciary, Carl Singh turned down an appeal by Attorney General Basil Williams and the Speaker of the National Assembly.

Cummings-Edwards said the people themselves gave that power to Parliament to change the constitution within the various levels of entrenchment, and affect people’s right to vote or choose who should be their president in keeping with certain restrictions.

Justice of Appeal Cummings-Edwards added that the appellant has failed to prove the amendment that provides for term limits was unconstitutional.

The amendment also provides for only Guyana-born persons to be eligible to become presidential candidates. United States-born Janet Rosenberg- Jagan had won the 1997 general elections.

Chancellor of the Judiciary, Carl Singh said any law that would have the effect of suppressing the right to freely elect someone of their choice would be unconstiutional. “The people are entitled, in keeping with democratic principles to freely elect their representatives,” Singh said. He further reasoned that further disqualification will further diminish the sovereign and democratic entitlements of Guyanese. He noted that “deeply entrenched” Articles 1 and 9 of Guyana’s constiution could only be changed by referendum to achieve legal validity and efficacy.

The Chancellor deemed as an “incredible” request by Attorney General Basil Williams to find that the proceedings were void from the inception because there was a reference to the non-existent Article 17 of 2001 instead of Article 17 of 2000. “It was an error and that’s what it is,” he said in relying on a Caribbean Court of Justice when it came to dealing with errors. He said no evidence had been led to show that anyone had been prejudiced or disadvantaged.

The appeal had been filed against a ruling by then Chief Justice, Ian Chang in July 2015 that the constitutional amendment, Act No. 17 of 2001, which limits presidencies to two terms is invalid because such a decision requires a referendum.

Chang had said Article No.17 of 2001 is without legal effect because it does not comply with other articles of the constitution dealing with repugnancy, democratic society and sovereignty belonging to the people which require a referendum for any alteration. 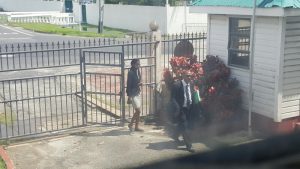 Lawyer for the applicant, Shawn Allicock arrives at the Court of Appeal.

Chang had reasoned that reasoned that  Article 1 and 9 underpin the republican committment to the fundamental concept of popular sovereignty or imperium populi thereby safeguarding against elective despotism by the elected representatives of the people.

“Thus, while the constitution provides for representative democracy, such representative democracy cannot entrench on popular sovereignty from which it derives and and which is entrenched by the requirement of the referendum,” Chang had said. Chang had determined that the two-term limit of Presidents indeed dilutes the rights of citizens to elect the person they wish to govern their country regardless of the number of times they wish that person to be Head of State.

Lawyers for the plaintiff, Cedric Richardson, had contended that the constitution could have been amended only by a referendum rather than by at least two-thirds of the members of the National Assembly.

In his affidavit, Plaintiff Cedric Richardson had argued that the purported alteration of the Constitution by Act 17 of 2001 would curtail or delimit the electorate’s choice of Presidential candidate by rendering ineligible for the candidature any person who has been re-elected once as President eg. Former President Bharrat Jagdeo.

The then Chief Justice had responded in the affirmative to questions posed to the court by qualified elector,Richardson who in an Originating Summon of December 3, 2014, cited several grounds for his contention. Of the four questions, Richardson asked was  whether the Act of 2001 that alters that of 1980 Constitution by way of a 2/3 vote of the National Assembly, restricts and curtails the democratic rights and freedom of the electorate enjoyed under the 1980 Constitution.