A Board member of the Cheddi Jagan Research Centre (CJRC) has accused government of engaging in “executive lawlessness” by failing to obtain a Court Order  to expel the centre from Red House, a move that harks back to the 1970s and 1980s.

“The attempted unlawful seizure of Red House, unlawful restriction of the movement of the occupants and the unlawful sequestration of its property, bring back sad memories of times past when the rule of law in Guyana was being severely undermined as a result of political oppression and authoritarian rule,” Senior Counsel, Ralph Ramkarran said in his latest Conversation Tree column. 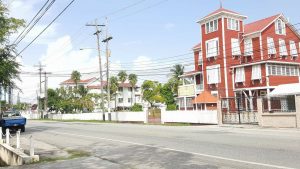 Meanwhile, police on Sunday- New Years Day-continued their round-the-clock presence outside Red House, High Street, Kingston, Georgetown. “The police have not been hostile at all; they are protecting the peace,” said CJRC Board Member, Indra Chandrapal.

If the worst comes to the worst and the High Court rules that the CJRC must vacate Red House, Chandrapal said most of the works of late PPP Founder-Leader and President, Dr. Cheddi Jagan have been removed. Jagan lived at Red House from 1961 to 1964 while he was Premier of then British Guiana.

Challenging the cancellation of the lease of Red House to CJRC, Ramkarran said not even the President has a legal right to evict the occupants and seize possession of Red House. “The attempt to eject the occupants of Red House is a straight case of the height of executive lawlessness. No Government official has the power to dictate the expulsion of occupants of State or any other property. If the Government requires possession, it must obtain an order of the Court. That is the rule of law. It applies to the President, the Government and the citizen,”  said the former House Speaker and long-serving member of the People’s Progressive Party (PPP).

Ramkarran left the PPP about 10 years ago after apparent dissatisfaction about the way that political party had been handling concerns about alleged corruptions.

He said it is the height of lawlessness for government to send its staffers to eject the occupants and seize possession, a situation that has caused him to hope “that this event is not a foreboding of what will happen in 2017.”

The People’s National Congress (PNC), while in government, had been repeatedly accused of ruling Guyana with an iron fist and putting down dissent. 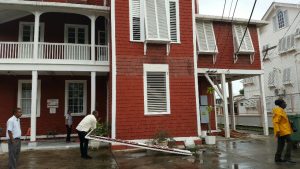 Controversy erupted over Red House after President David Granger announced the revocation of the lease on December 30 and gave CJRC one day to vacate the premises and make way for the National Trust to move in. Granger’s decision was based on advice he received from Attorney General, Basil Williams that the 99-year lease at GYD$1,000 per month had been improperly granted on March 30, 2012 without the approval of either the President of the Day or the National Trust.

The CJRC has since taken the matter to court and has secured an agreement that none of the CJRC’s properties at Red House until the matter returns to court in February.

While the matter was still pending before Chief Justice, Yonette Cummings- Edwards on December 30, 2016, Ministry of the Presidency workers descended on Red House where they removed the padlock and tore down the Cheddi Jagan Research Institute sign.

“The CJRC had occupied the premises for about fifteen years and had accumulated a vast amount of material. Even trespassers are given longer periods to vacate premises by courts. In law, the period given must be reasonable. 48 hours could not be reasonable under any circumstances,” said Ramkarran.

The Senior Counsel appeared to support Nandlall’s reported challenge to the Attorney General’s contention that government had already revoked the lease and had taken possession of the property. “I know of my own knowledge that the claim that Government was in possession of Red House was palpably false. I spoke to staff of the CJRC by telephone from the CJRC at about 4 pm and they were in the Red House carrying out their normal activities,” said Ramkarran.

The CJRC Board member theorised that possibly because of the uncanny connection, that in order to create conditions on the ground, as reported by the Attorney General in court, that the premises were invaded by persons wearing shirts with the insignias ‘MOTP,’ assumed to be ‘Ministry of the Presidency.’

Subsequently, there was vigil on December 30, 2016 by PPP supporters that sparked off a counter-vigil by PNC members including Minister of Social Protection, Volda Lawrence.

President Granger has long called for the establishment of a research centre on all of Guyana’s Presidents instead of only one. However, the PPP has argued that Dr. Jagan, who died in office in 1997, deserves special recognition because he was the architect of Guyana’s struggle for political independence from Britain.