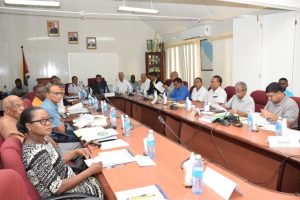 Proposals to sell off a number of estates of the bankrupt state-owned Guyana Sugar Corporation and shed non-core operations like drainage and health services were Saturday shared with the unions and the opposition People’s Progressive Party Civic (PPPC).

The talks come against the background of claims and counter-claims for the poor state of the industry. They include the 36 percent cut several years ago of Europe’s preferential price for the sweetener, labour unrest, and an all-time low production of 189,000 tonnes this year due to perceived bad management including plant husbandry, high operational costs and poor weather

President of the National Association of Agricultural, Commercial and Industrial Employees (NAACIE), Kenneth Joseph said the documents were shared with representatives of his union, Guyana Agricultural and General Workers and the PPPC meeting held at the Ministry of Agriculture’s Board Room.

The unions and the PPP have been given time to study the documents and return for a second round of talks,  even as Joseph said GuySuco and government are considering shrinking the existing estates to three: Wales-Uitvlugt, Albion-Rose Hall and Blairmont.

He said the plans include the sale of Skeldon’s estate, factory and co-generation facility possibly to an American firm, the exclusion of a section of Rose Hall’s field operations and the closure of the Rose Hall factory, and the possible sale of Enmore as the potential buyer appears interested in taking advantage of the packaging capacity there.

Joseph said other major aspects of GuySuco’s planned overhaul include the stripping of drainage, health and activities that “have little or no direct connection with sugar.” Joseph said government planned to provide the unions with the projected savings from such a plan.

“It appears that GuySuco will no longer be responsible for these services whether or not the industry’s operations are contracted,” Joseph told Demerara Waves Online News.

While government appeared eager to decide GuySuco’s future, the NAACIE President said Minister of State, Joseph Harmon assured the delegations that a decision would not be taken until the talks have ended. This appears to be a done deal but Harmon said this isn’t a done deal and no decisoon will me made until a conclusion of the discussions,” Joseph said.

The trade unionist, whose union represents mainly factory and office workers, expressed cautious optimism about the outcome of the talks, even as he maintained that there is no need to close any of GuySuco’s operations.

Joseph said Saturday’s meeting showed that before GuySuco had not been making any real effort for the unions and other stakeholders to be part of the corporation’s decision-making.  GAWU has declined invitations to sit on GuySuco’s board of directors.

Meanwhile, the PPP  demanded that the contents of several technical and non-technical documents and memorandum of understanding between government/ Guysuco and the prospective investor be shared with the party. “We got a clear commitment that they will provide them,” he said.

PPP General Secretary, Clement Rohee confirmed that the closure of other estates was discussed at the meeting, but maintained in the talks that it did not support the closure of any of the estates. “The party has always maintained that it is not in favour of the closing of any estates, we are not in favour of the privatisation of any of the estates,” he told Demerara Waves Online News.

The PPP wants government to give more consideration to a Commission of Inquiry that has been conducted into GuySuco’s operations and the role of the bipartisan parliamentary committee on economic services. “We are happy that we were invited as a stakeholder because we have a vested interest in that and we are happy too that the unions were well represented,” he said.

GAWU and NAACIE were represented by their Heads, Mr. Komal Chand and Mr. Kenneth Joseph, respectively. Representatives from the various sugar estates including Wales, Albion, Skeldon, Enmore and Uitvlugt were also present.

Leading the Government team, Mr. Ramjattan, in an invited comment at the conclusion of the meeting, said that Cabinet took the decision at its last sitting, to have the consultations begin at the soonest possible time. Registering his satisfaction with this initial meeting, the Minister said that consultations are being conducted to ensure that the best interest of all stakeholders will be considered.

“I am happy to state that indeed it was very civilized. We made a major decision at last Cabinet that we do have to have consultations and it will be extended now. The documentation that we gave them as to the options proposed to us by GuySuCo has been shared and they said that they needed time to study it and we agreed with that because they only got them this morning. They have asked for some further additional reports and studies as to what made GuySuCo come to the decision and to set out these options. I agree with them because they must have source documents and so it is important that they be part and parcel of the decision-making or at least know how we are thinking and that is important. I am very pleased with the entirety of the meeting,” Minister Ramjattan said.

Minister Harmon echoed similar sentiments, noting that despite the late notice members of the Opposition, the Unions and the estates still attended and were actively involved in the discussions, which will ultimately result in decisions being taken with regard to the sugar industry.

“I think they are all understand what the position is. We shared documents with them and I believe that we are going to have some fruitful consultations going forward since the [sugar] industry is a very important industry. It is of national significance and so decisions that are made in that regard must take into consideration those factors,” Harmon was quoted as saying in a statement issued by the Ministry of the Presidency.