Hinterland Employment Youth Service participants to be paid by year-end 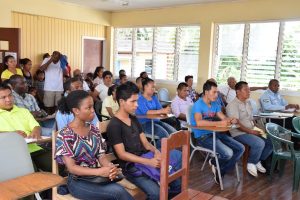 Residents of Moruca, Region One

Participants of the Hinterland Employment Youth Service (HEYS) programme were assured that they will receive outstanding payments owed by the end of December.

Minister within the Ministry of Indigenous Peoples’ Affairs, Valerie Garrido-Lowe met with residents of Moruca, Region One  on Saturday, and offered apologies to HEYS participants that have not been paid since the end of September.

“Before the month is up, you will get your payment. This goes for facilitators, as well as youths. Everything that we owe to you will be given before the month is over,” Minister Garrido-Lowe was quoted as saying by the Government Information Agency (GINA).

The Minister apologised for disappointing the participants. “I apologise to you on behalf of our Ministry and that problem will be fixed before the month is over and we will enter the new year with a clean slate,” she assured HEYS participants.

The Minister expressed the hope that the youths who have benefited from the training will begin some form of self enhancement, “Because you will be getting your grant, also the grant that you were supposed to get at the end of the year, you will be getting it before.” 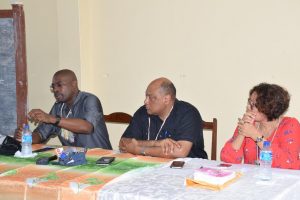 Meanwhile, Minister of Natural Resources, Raphael Trotman who was in Moruca to officially hand over street lights to Santa Rosa residents gave his personal assurance to the HEYS participants to have the non-payment issue resolved. “I’m going to ensure that this money is paid before Christmas…I’m going to ensure that things get moving,” Minister Trotman told residents to rounds of applause.

Also apologising and promising to remedy the matter as soon as possible, was Minister of Public Infrastructure,David Patterson.

Minister Patterson explained to HEYS participants that Central Government was a “paper driven organisation and I think that sometimes we forget that persons in the communities are expecting us to act faster than they are acting.” Minister Patterson said he will work with Ministers Garrido-Lowe and Trotman “to cut out half the paperwork” to ensure that payments reach the participants as promised.