A Guyanese company that holds the local franchises for several American fast food chains plans to invest in the agriculture sector for the supply of produce to its latest addition, Pollo Tropical.

Managing Director of CAMEX Limited, Terrence Campbell said 90 percent of the meat, fish, provisions, rice and vegetables are being bought locally for Pollo Tropical’s dishes. “It’s not only about healthy eating. It’s also a case that this business, as it expands, will have an impact on the agricultural side of the economy,” he told Demerara Waves Online.

He explained that expansion plans would include stronger links with the local agriculture sector. “We intend to work with and empower a lot of small farmers across the country. This is not only an economic goal for us; it’s also a social goal for us,” the businessman said.

Pollo Tropical is headquartered in Florida where its food is very popular among the large Cuban population there.

CAMEX Limited plans to invest in 50 to 60 farmers across Guyana during 2017 who will each be able to sell produce worth between GYD$1.5 to GYD$2 million monthly to CAMEX-held fast food franchises. He  hopes that government will lend a “stronger hand” to have the Guyana Power and Light sell electricity to agro-processors at break-even prices or provide tax incentives.

“The issue about electricity cost is an easy excuse. I believe that both the government and the private sector have got to come together to identify the areas in which they are going to have a comparative advantage,” he added.

With the economy having slowed down, the businessman hopes that agro-processing will provide Guyana with an opportunity to earn foreign exchange ahead of the commencement of commercial oil production in 2020. 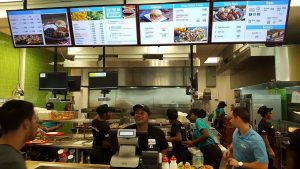 Pollo Tropical’s first outlet at the Food Court located in the seven-storey building at Camp and Robb Streets, Georgetown.

Campbell said plans are also in the pipeline for the other franchises to offer fries from locally produced provisions, instead of just Irish potato fries. “You will see that happening as we go forward, but initially right now the linkage will come mainly from Pollo,” he said.

He said so far, US$1 million have been spent on setting up Pollo Tropical’s two outlets in Guyana- the first at the food court at the seven-storey building at the corner of Robb and Camp Streets and the other at Giftland Mall, Liliendaal, Greater Georgetown.   At least five Pollo Tropical outlets will be opened in Georgetown and each staffed by 20 to 30 persons.

He said 90 percent of the ingredients for Pollo Tropical’s menu will be locally produced with the exception of pork that would be imported until a guaranteed supplier with the right specifications can be found.

The CAMEX boss said Pollo Tropical’s food would be healthier. “You can eat Pollo everyday. The product is a grilled product. There is no frying, no shortening, no battering and it comes along with rice and beans and vegetables so, in other words, this is a restaurant with international standards that is offering ‘mommy’s cooking’,” Campbell said.

2016-12-18
Denis Chabrol
Previous: Hinterland Employment Youth Service participants to be paid by year-end
Next: BREAKING NEWS: Bandit shot, accomplice arrested after robbing persons at a get together