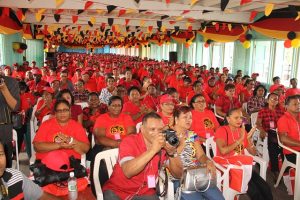 A section of the attendees at the PPP’s 31st Congress at Cotton Field Secondary School.

Still reeling from accusations of corruption and discrimination in some quarters during its 23-years in government, the opposition People’s Progressive Party (PPP) on Saturday set the tone for a makeover of its bruised image in some quarters.

At the same time, the PPP took a hard line against patching up relations with members who have left and have been harshly critical of the party, despite calls in certain sections to do so.

“They are some at home and abroad who claim to know what is best for the PPP. They say that we must dump our foundation principles, that we must throw out tried and tested party leaders and bring in back those who attack and besmirch the good image of our party. These people claim to care for the welfare and the interest of the PPP.

“We must reject those pretenders of upholding Cheddi Jagan’s legacy and expose them for what they really are. Down with the hypocrites, down with the wolves in sheep clothing,” Rohee told the Congress, the first since the PPP lost power in May 2015. 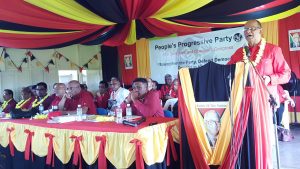 PPP General Secretary, Clement Rohee addressing the opening of the 31st Congress of his political organisation.

Former executive members Ralph Ramkarran, Moses Nagamootoo and Khemraj Ramjattan are among those who have parted ways with the PPP after several decades, and have remained harsh critics.

The women and youth arms of the PPP were the first to signal that the time has come for the party to infuse new blood, at the opening of the 31st Congress being held at the Cotton Field Secondary School under the theme “Strengthen the party, Defend democracy, Onward to victory.”

Speaking on behalf of the Women’s Progressive Organisation, Indra Chandarpal, she said the time has come to “replenish our support base” and leadership with the right quality of persons because many have gotten old or have moved on in life after playing major roles in the party and government. “As we seek to rejuvenate our party by electing new persons who will take on the mantle of leadership in the various party bodies and structure, we need to ensure they understand the philosophy and guiding principles of our party. We need leaders who are honest and fair, leaders who can inspire by putting the party first,” said Chandarpal, a former Housing Minister when the PPP was elected in 1992.

Opposition Leader, Bharrat Jagdeo also assured delegates and observers that if the PPP wins the 2020 general and regional elections, steps would be taken to ensure there is no discrimination. “We will treat people even who do not support us fairly because we will have no moral right to fight discrimination that this government has institutionalized if we ourselves discriminate against people because of their race and their religion,” he said.

He has also advocated a change in the philosophical position of the PPP to focus more on what is good for Guyana rather than ideologies such as capitalism and socialism.  On assuming office in 1992, the PPP-led government had inherited and continued to implement a market-oriented system that had been backed by the International Monetary Fund and World Bank .

The Progressive Youth Organisation (PYO) hopes to reform and re-energize, transform and modernize the PPP by joining local and international organisations and building membership, party groups and districts through a number of initiatives.

The PPP General Secretary also used the opportunity to highlight the record of the PPP-Civic while in government. “As a ruling party, we were never partisan. We embraced all Guyanese,” he said.

Rohee also used the opportunity to prepare the minds of the party-faithful to mobilize locally and overseas to deal with any attempts by the APNU+AFC coalition to rig the 2020 general elections.

He charged members to fan out like an army of volunteers to reach out to everyone in an effort to win a convincing majority. “We must be prepared to make sacrifices and never take anyone or any community for granted,” he said.

2016-12-18
Denis Chabrol
Previous: Time for PPP to get rid of “isms”, reach out to disappointed APNU supporters, Jagdeo tells PPP Congress
Next: Hinterland Employment Youth Service participants to be paid by year-end