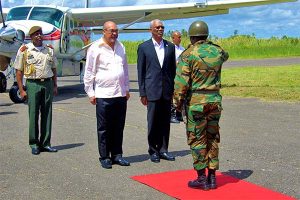 The Ministry of the Presidency said Bouterse’s  visit is a follow-up to one paid by Granger to Nieuw Nickerie, Suriname on July 1, 2016 and the two South American leaders would “discuss areas of mutual interest in an effort to deepen relations between the two countries.”

Accompanying President Bouterse will be Minister of Foreign Affairs, Ambassador Niermala Badrising, Minister of Justice and Police, Ms. Jennifer Van Dijk-Silos, Advisor of State to the President of Suriname and Mr. Harvey H. Naarendorp. They will be joined by Suriname’s Ambassador to Guyana, Ambassador Mehroen N.Kurban-Baboe.

The Surinamese leader and his team are scheduled to arrive at the Eugene F. Correia International Airport, where a Guard of Honour will be mounted by ranks of the Guyana Defence Force.

The Presidents of Guyana and Suriname- who are both former soldiers- are expected to host a joint news conference on matters related to their meeting at the Marriott Hotel, Guyana.

Suriname and Guyana are yet to resolve their land border controversy over the New River Triangle.

At the request of Guyana, the United Nations Tribunal on the Law of the Sea several years ago ruled in this country’s favour of the maritime boundary dispute that had at one time seen Surinamese gunboats chasing out a Canadian oil exploration rig from a concession in the same area that had been granted by Guyana.

The two sides also face common challenges such as trafficking in persons, drug trafficking, cross-border movement of criminals, and the smuggling of goods.

At the same time, there is a thriving legal trade and the establishment of private businesses such as Assuria Insurance, Rossignol meat, Fernandes bakery, Rudisa automotive services and beverages and Beharry’s pasta and other products in each other’s country.

Guyana and Suriname have in the recent past explored bridging the Corentyne River, which might reduce or eliminate dependence on the  ferry and back-track services.

2016-12-15
Denis Chabrol
Previous: “I believe in transparency, I believe in honesty” – Georgetown’s Deputy Mayor-elect, Jaikarran
Next: E-Gov’s Centre of Excellence in Information Technology to be completed in January