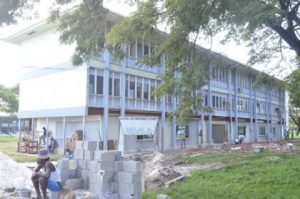 The CEIT building located at the NDMA on the University of Guyana, Turkeyen Campus

The eGovernment Agency’s Centre of Excellence in Information Technology (CEIT) is expected to be officially opened in February, the Government Information Agency (GINA) reported.

Representatives from the Agency, the High Commission of India, the Ministries of Foreign Affairs, Finance, Public Telecommunications and board members of the National Data Management Authority (NDMA) on Thursday visited the construction site where the CEIT is to be housed.

Located on the Turkeyen Campus of the University of Guyana, CEIT is occupying the NDMA building. Renovations began in August and were expected to be completed in December, but setbacks have seen the completion date pushed to January 15, 2017.

The CEIT is a collaborative initiative between the Government of India and the eGovernment Agency. Second Secretary of the High Commission of India, S.M.Joshi represented the Indian High Commissioner on the site visit.

CEIT’s Project Manager and Director of Policy and Training at eGoverment Agency Malcolm Williams told GINA that the delays in completing the works were many “but those issues we’ve overcome them now so we expect that there won’t be any further delays.” 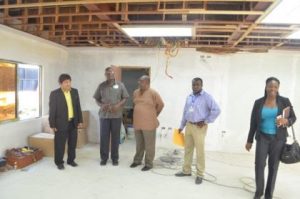 Second Secretary of the High Commission of India S.M.Joshi, CEO of eGovernment Agency Floyd Levi, Permanent Secretary of Public Telecommunications Derrick Cummings, CEIT Project Manager Malcolm Williams and Director of the Department of International Cooperation at the Ministry of Foreign Affairs Vanessa Dickenson examine one of the classrooms.

The building had to be renovated to accommodate classrooms and other facilities for the teaching of ICT courses. The eGovernment Agency will furnish the CEIT while the Indian government will provide the ICT equipment.

The CEIT will offer advanced ICT in the areas of networking, cyber security, software development, IT project management among other Williams said. The eGovernment Agency will be the administrator of the facility.

The Indian Government will also conduct training sessions for staff of the CEIT, Williams told GINA. “Initially the Indian G overnment they’ve promised to train up to 20 trainers so they will bring their trainers from India to prepare the set of trainers who will then become the permanent staff for the CEIT,” Williams explained.

2016-12-15
Denis Chabrol
Previous: Suriname’s President to visit Guyana on Dec 16
Next: “We don’t know about any dirty money”- Bank of Guyana’s Governor