“I believe in transparency, I believe in honesty” – Georgetown’s Deputy Mayor-elect, Jaikarran 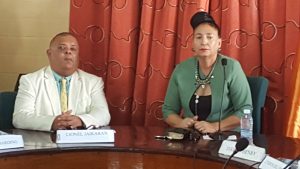 Georgetown’s Deputy Mayor-elect, Lionel Jaikarran on Thursday vowed moments after he was elected to stick to his stance on a number of issues that are before the Council, even as his predecessor Sherod Duncan forecasts a rough road ahead.

“My positions that I held before are not going to change. The only thing that has changed is that I changed my seat and I am now the Deputy Mayor. Nothing that I specified that I support or did not support in the past will change but hopefully my approach can get us a little more progress a little more down the line,” Jaikarran told Demerara Waves Online News.

Jaikarran and Duncan, who are from the Alliance For Change (AFC) are among a small minority group of councillors who have openly opposed the introduction of the current parking meter project, saying the process lacked transparency.

The AFC has decided to emphasise and project an image of  integrity, transparency and accountability.

Jaikarran received the majority of support from A Partnership for National Unity/ People’s National Congress Reform-aligned councillors (24 for, 0 against, four abstentions) around the horse-shoe table to beat Carolyn Caesar (3 for, 17 against, 8 abstentions and Malcolm Ferreira (3 for, 14 against, 11 abstentions).

Duncan and Chase-Green would continue their existing term until March 31, 2017 until Jaikarran takes over.

Duncan hoped that his successor and Mayor Chase-Green would be compatible in  helping to manage the City’s affairs. “It is my belief that as Mayor you will need somebody even more in tune with your thinking to serve as Deputy Mayor and I think Lionel is that person. Lionel is your contemporary in may regards and I am certain that he is going to put his hand to the plough and together collectively as a council we are going to move the City forward,” he said.

The outgoing Deputy Mayor does not believe that the task ahead will be smooth sailing. “I know that we have some rough days ahead. We have basically started a good work over the past eight months but there are lots more we have to get done and we have to get it done together. There are going to be disagreements. We can agree to disagree but we can disagree agreeably,” said Duncan.

Don’t expect long-winded politically correct sounding expressions from the Deputy Mayor. He prefers to be “very blunt” and methodical in his approach. “It is not going to differ radically from the way I dealt with everything. I always stand up for what I believe in; I believe in transparency, I believe in honesty,” he added

After outgoing Deputy Mayor Duncan indicated that he would not have been contesting for the Mayoral or Deputy Mayoral position, Jaikarran said he ended up being the candidate although he had gone prepared to vote for Duncan.

Before pulling out prior to the start of the statutory meeting, Duncan had wanted a secret ballot but in the end, the Councillors agreed by majority to vote by a show of hands.

APNU Councillor, Gregory Fraser congratulated Duncan for being a good fighter who never gave up and looked forward to his continued work on the council. “I thought you would have gone on longer. I hope you continue to serve us in whatever capacity you are asked to serve us because you have good health, you have good experience and I think you cans share that.”

Meanwhile, Mayor Patricia Chase-Green said one of the reasons that Duncan had taken positions on a number of issues was because he had not been a member of certain committees. “He may not support me in everything I have been doing. He has always been negative on some aspects because it wasn’t clear to him,” she said when asked by Demerara Waves Online News. She earlier said Duncan did not fully understand the Standard Operating Procedures of the Council and its management

She expects that the council would move forward in unison to execute outstanding and new projects for the City of Georgetown.