Georgetown Mayor Patricia Chase-Green will once again serve as Mayor for one year from March 2017 after winning by default in an election which saw Deputy Mayor Sherod Duncan withdrawing his candidacy for mayorship.

Duncan had come out to be critical of the Mayor’s actions in office, even calling for a public debate between himself and Mayor Chase-Green before the December 15 election.

Before the session, facilitated by Town Clerk Royston King, got underway, a vote was taken to determine if councillors would vote by secret ballot or by show of hands.

Chase-Green’s nomination for mayor was made by Councillor Gregory Fraser and seconded by Councillor Oscar Clarke. No less than two seconds later, Councillor Junior Garrett stood to call for the nominations for Mayor to be closed.

Councillors Garrett, Clarke and Mayor Chase-Green have shared a close working relationship which emerged in the public when they all embarked, along with the Town Clerk, on trips to Mexico and Panama City to source information for what is now the City Council’s controversial parking metre project.

After the announcement of her win, Mayor Chase-Green was asked to preside over the election for Deputy Mayor, which saw Councillors Malcolm Ferreira, Lionel Jaikaran, and Carolyn Caesar.

Jaikaran emerged as victor after winning 24 votes for his nomination with four abstentions.  In their victory speeches, Mayor Chase-Green called for a binding together of the Council and the utilising of internal mechanisms to resolve conflicts rather than going to the public.

Meanwhile, Councillor Jaikaran, the deputy mayor-elect, was simply elated to have won the election, comparing the win to the birth of his first child. 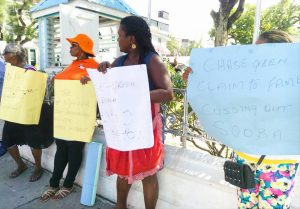 Section of the protesters outside City Hall today

The scenes outside of City Hall were a bit different as a small group, led by former Councillor Eon Andrews, expressed concern about the possibility of Chase-Green being re-elected.

Andrews said he would not be surprised if Duncan was forced to withdraw. “It’s sad to know that such a talented young person can be so fed up or feel betrayed to just walk away,” Andrews told Demerara Waves Online adding, “it ism’t something that he wants to do. I know he likes the city.”

Former councillor Andrews believes the odds were against Duncan since majority of the seats are held by the APNU+AFC, and in that coalition, most of the council seats belong to the APNU.

“In a coalition where people can see each others as equals,” Andrews continued, “[he] will never have it because they are not from the largest group.”

Both Chase-Green and Duncan will continue to hold their offices until until March 31, 2017