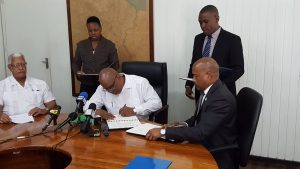 Minister of Agriculture, Noel Holder (left) looks on as Finance Minister, Winston Jordan (second from left) and the Chief Executive Officer of the Caribbean Development Fund, Rodinald Soomer sign the loan agreement for the revival of agriculture in several villages.

Several villages across Guyana that Finance Minister, Winston Jordan says have been neglected during the past 20 years, will benefit from a US$12.43 million programme to help revive their agricultural production to supply local and Caribbean markets.

The Caricom Development Fund says it is providing US$10.4 million and the Guyana government US$2 million towards the project that initially targets 175 farmers in “four very economically challenged areas that were identified by Guyana- Ithaca, Buxton, Triumph and Mocha-all areas with notably high levels of youth and female unemployment.” The CDF says the villages have a total of 1,200 farmers and it is expected that 35,000 persons would benefit.

“Those who live in Buxton and BV and Mocha and Itahca will tell you how neglected they were over the last two decades,”  Jordan said in brief remarks before signing the agreement with CDF’s Chief Executive Officer, Rodinald Soomer.

The CDF Chief noted that those villages in Regions Four and Five had a rich history of agricultural production which has become marginal over time as the entire backlands have been left uncultivated, under-cultivated and underdeveloped due to inadequate access and poor drainage and irrigation.

The monies would be used to buy farming equipment that will remain in the identified communities, finance land clearing, restore and upgrade drainage and irrigation canals,  install a  pump in each of the farming communities and provide technical support for targeted farmers.  Planners expect that 155 kilometres of canals and drains and 40 kilometres of fair weather dam would be constructed and one pump station would be provided to enable farmers to reclaim 2,500 acres of abandoned land and bring it back into cultivation with the aim of increasing production and exports to sister Caribbean Community (Caricom) markets.

Finance Minister Jordan said the project would help combat unemployment in the targeted communities comprising 9,500 farming households and more than 20,000 persons. “It is anticipated that with the improved drainage systems and access, the new farmlands will be brought under cultivation, with a variety of crops and fruits being targeted for production to meet the needs of the community and surrounding villages, nationally and with an eye on export. More importantly, this intervention will result in increased incomes and reduced unemployment in the targeted communities,” Jordan said.

Asked how Guyana intends to penetrate the non-tariff barriers in Caricom member-states, the Finance Minister said the Food and Drug Administration would be equipped with modern laboratories to conduct tests to international standards and packaging of value-added products would be improved. “In times of glut you can process those products and sell to the Caricom and wider afield. Caricom market is there. It’s a guaranteed market,” Jordan added.

Permanent Secretary of the Ministry of Agriculture, George Jervis told Demerara Waves Online News added that the project is expected to be sustainable because cooperative groups would be established in communities.  He said the farming equipment would remain in communities and would be managed by the National Drainage and Irrigation Authority (NDIA).

Jervis said there would be market-driven approach to match demand for high quality produce in Caricom countries while the second and third best would be processed into value added products. “In the area of processing, we are not waiting on the project to start. We are using funds that the Ministry has in its possession to start processing activities in all four communities as soon as the project kicks off,” he said. Jervis highlighted that tastier bread with a greater shelf life can be made with 30 percent cassava- 70 percent wheaten flour mix.

The cassava flour-wheaten flour mix has been successful in Barbados.

The CDF says its blend of a US$6.63 million loan and US$.3.81 million grant will result in a softer package of assistance. It has a maturity of 15 years and a nominal interest of three percent. There is a grace of two years on principal payments and interest is paid quarterly on the balance disbursed.