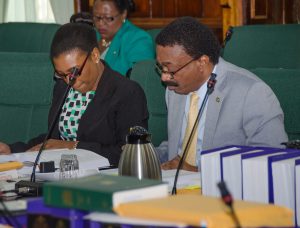 Attorney-General and Legal Affairs Minister, Basil Williams preps for questions on budgetary allocations to his Ministry.

After some amount of dodging, Attorney General and Legal Affairs Minister Basil Williams told the Supply Committee of the National Assembly that a 2017 budgeted sum of $19.7M is for the purchase of a vehicle to be used by himself.

The Attorney General was, at the time, responding to questions raised by Opposition MP Anil Nandlall who questioned what type of vehicle would be purchased at that sum, and what would the vehicle be used for.

For some time, AG Williams had dodged questions on the type of vehicle to be purchased but later indicated the vehicle “should be a Toyota.” He said the Ministry “will determine what it [the money allocated] could by.”

Asked about the size of the vehicle, the Legal Affairs Minister responded he could not say but asserted “the honourable AG would be having a proper vehicle this time.”