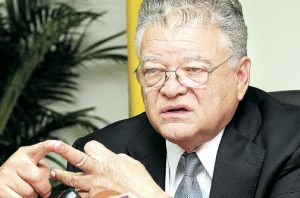 FEARS that there could be a shortage of rice in the country were Tuesday quelled by Minister of Industry and Commerce Karl Samuda who announced that imports from Guyana and Suriname will be allowed into the market, the Jamaica Observer reported.

The Jamaica Customs Agency (JCA) on Monday temporarily ceased the clearance of rice at all ports of entry, pending test results after a news report suggested that plastic rice was being sold for consumption in the country.

Samuda told journalists at a press conference at his New Kingston office yesterday that the Bureau of Standards Jamaica (BSJ) was provided with samples taken from across the island, including Manchester where the threat originated, and that so far, he can assure consumers that there is no evidence of any contamination of plastic within the samples tested.

“At the moment, there are shipments on the wharves awaiting clearance and the decision has been taken that clearance would be made immediately so that by this afternoon supplies will be reaching the shelves of the supermarkets for all rice coming from Guyana and Suriname,” Samuda said.
He explained that both countries are considered a part of “our” domestic market and that there have never been incidents of any kind with contamination or otherwise.

“So there are no justifiable reasons for us to hold those shipments of rice from the Jamaican people,” he said.

The minister said in the interim, BSJ will continue testing samples to ensure that consumers are protected. He added: “We will be vigilant in our spot programmes which will have spot checks of all importations of rice.”

Tests are also to be conducted by BSJ, Ministry of Industry, Commerce, Agriculture and Fisheries and the Food Storage and Prevention of Infestation Division.

At the same time, he said that Government is considering steps to have all packages of rice labelled before distribution for sale.

“We have been advised that certain importers have been importing rice from sections of the Far East and this has caused great concern based on certain information reaching customs and our ministry that in three instances, at least, we have been advised of fake labelling.

“We are in the process now of confirming the allegation that these labels are fake labels, not genuine, and any doubt at all that we are in, we cannot put our Jamaican people at risk. We have to be very certain of the source of food that enters this country,” he assured.

He said agencies have been instructed to comb warehouses of supermarkets to identify the counterfeit product and warned that he will be seeking legal advice as to actions that can be taken, including closing establishments found with the products.

2016-12-14
Denis Chabrol
Previous: Not everyone will be part of oil and gas sector, Minister Trotman warns
Next: “Neglected” villages get US$12.4 million to kick start agriculture, combat unemployment