Not everyone will be part of oil and gas sector, Minister Trotman warns 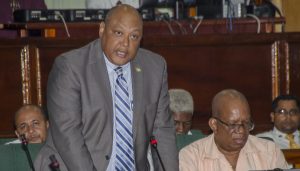 As Guyana and Guyanese await the benefits floated around by prospects of the upcoming oil and gas sector, Natural Resources Minister Raphael Trotman has warned that contrary to popular belief, not everyone in oil-producing countries are part of those massive wealth-earning sectors.

Trotman was at the time responding to questions in the Supply Committee of the National Assembly posed by Opposition MP Odinga Lumumba.

MP Lumumba questioned what extent the administration hopes to incorporate small, medium, and large-scale businesses to bridge the gap between Guyana’s rich and poor.

Trotman responded the administration does have a local content policy, which will be presented to Cabinet later this month so that it could be presented to the public before the end of December 2016 or January 2017.

Trotman said a draft of the policy will be made public so that the public can contribute to the final document. “We will share it in a matter of weeks with the House and the public,” Trotman said in Parliament’s Chamber.

Unsatisfied with the response offered by Minister Trotman, Lumumba questioned further whether the document mentioned does not specify potential employment and business involvement on all levels, as well as training for the wider population on their involvement.

Minister Trotman responded there is a listing of all services surrounding oil and gas found in the Index of the document.

“It is not true that everyone can be part of the sector,” Minister Trotman warned while referencing Uganda where it was found that out of a population of 18 million, less than 4,000 people were directly involved in the oil and gas sector. Trotman noted it is the extrapolation of benefits from such sectors that will spur growth.

Further questioned on the involvement of village economies in the oil and gas sector, Minister Trotman responded that regulations are being developed to ensure companies are compliant with their commitments to involve local partners.