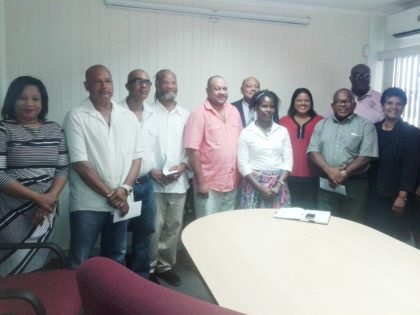 Minister of Natural Resources Raphael Trotman (back centre) with small miners who received their mining lands. Also in photo is Chairperson of the Closed Areas Committee Dela Britton (far left) and Acting Commissioner of the GGMC Newell Dennison (back row far right)

This begins to fulfill a promise made by Minister of Natural Resources, Honourable Raphael Trotman to small miners at the Small Miners Conference in January, 2016.

The new members of the committee, who were installed in February, 2016 have been working with the Guyana Geology and Mines Commission (GGMC) to clear the backlog of pending applications and identify lands for allocation to small miners. Of the 300 applications received, over 120 have been examined and 110 (92%) have been sent to Minister Trotman for approval. Fifty one (51) have been approved so far and the remaining 59 are earmarked to receive allocations in the near future.

“We had to go through a process of creating guidelines… in our deliberation we were asked to do everything in a fair and transparent manner, and we sincerely hope that we have fulfilled that mandate today,”Chairman of the CAC, Ms. Dela Britton said.

Minister Trotman congratulated the awardees and thanked them for their patience and faith in the process. He also thanked the CAC and GGMC for a job well done and encouraged the miners to carry out their activities safely and responsibly to ensure that the environment is protected but more importantly, to ensure that life and limb are protected. He assured the miners of support noting “the government is here to support you and we ask that as citizens you support the government in its efforts”.

The Closed Area Committee was established in February 1994 with a mandate to identify closed areas and state reserves that can be open to miners for the purpose of the location of claims, and approving applications for grants of prospecting and mining licences, prospecting permits and mining permits. The CAC continues its work and is in the process of looking at applications from larger bodies including syndicates.