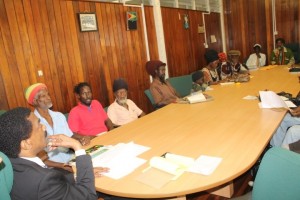 Attorney General Basil Williams (in foreground) meeting members of the Rastafarian community at his office on Carmichael Street, Georgetown.

The Alliance For Change (AFC) is insisting that Guyana’s narcotics law be amended to  scrap jail terms for  the possession of small amounts of marijuana for personal use, and  the opposition People’s Progressive Party-Civic’s (PPPC) parliamentarians are expected to vote with their conscience instead of along strictly party line.

AFC Leader and Minister of Public Security, Khemraj Ramjattan told reporters that his party was firmly behind the amendment, but he did not know what was A Partnership for National Unity’s (APNU) position. “I can’t say, but I can say for the AFC members it’s fully supported. I think you can direct your question there to the APNU members,” he said when asked by Demerara Waves Online News whether the draft amendment is being supported by the AFC members.

Attorney General and Minister of Legal Affairs, Basil Williams said government has not yet discussed the amendment to the Narcotics and Pyschotropic Substances Act that has been tabled by AFC parliamentarian, Michael Carrington. Williams last December told a meeting with Rastafarians at his office that the Carrington-sponsored Bill could not be tabled because the procedure requires that draft laws and related matters be considered by Cabinet.

Ramjattan said “we fully support hat Michael Carrrington amendment” but he could not say when it would be debated because it first has to be approved by Cabinet.

However, Carrington said as far he was aware there was no need for a private member’s Bill to be taken to Cabinet first before it is debated. Carrington said after the parliamentary recess ends he would push for it to be debated so that persons caught with small amounts of marijuana would not be jailed. The law provides for as much as five years imprisonment.

Opposition Leader, Bharrat Jagdeo said following talks with AFC Chairman, Nigel Hughes the issue of reducing penalties for the possession of small amounts of marijuana was discussed in the PPP and a decision has been taken to allow parliamentarians to vote on it as they see fit. “We said we will allow a conscience vote. Those PPP MPs (members of parliament) who want to support it can support it and those don’t want to support it will not need to support it,” he said.

Jagdeo expressed concern that many youths caught smoking a “joint” are eventually jailed for several years instead of being sent to rehab centres or ordered to provide community service.  He suggested that the jails were being overcrowded by such petty offenders. “We can use our prison space for more serious crimes,” he said.

The Opposition Leader restated his party’s 2015 general elections campaign position that the PPP does not support the growth, production, sale or export of marijuana.

Carrington estimates that it costs the State at least GYD$1.2 million per year to feed and maintain a prisoner.