Konawaruk bridge to be ready for use next Monday 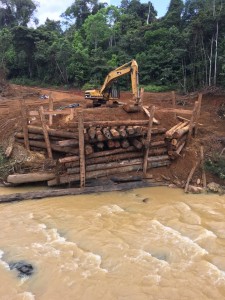 The Ministry of Natural Resources on Friday said repairs to Konawaruk bridge would be completed by next week Monday, August 22.

Junior Minister of Natural Resources, Simona Broomes said she received assurances from MMC Inc. that the major thoroughfare would be also strengthened to cope with the effects of bad weather.

“MMC Inc. has further assured the Minister that the bridge will now be reinforced to ensure that it can withstand the ravages of inclement weather in the future,” the ministry said in a statement.

Broomes on Friday August 19, 2016 visited mining communities at Konawaruk in Region Eight and received an update on the  “important cog to mining operations in that region and which was recently swept away by bad weather.”

Broomes said that those miners with whom she spoke earlier Friday expressed relief at the news of the imminent restoration of the bridge and indicated their satisfaction over the on-the-ground attention that she continues to pay to the sector.

The Minister, meanwhile, has alluded to weather related difficulties affecting smaller bridges in other parts of the Konawaruk, including the Tiger Creek area, which are having a negative effect on mining operations throughout the region.

Arising out of this the Ministry of Natural Resources says it is engaging the Ministry of Public Infrastructure on the matter of the early repairs/restoration of the affected bridges.

Minister Broomes says that the experience of today’s interior visit, and previous visits, serves as a timely reminder of the importance of continually strengthening the infrastructure in the mining sector.