GT&T, govt to begin negotiations next month on monopoly status 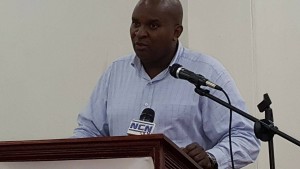 Adviser to the Minister of Public Telecommunications, Lance Hinds.

Negotiations with the Guyana Telephone and Telegraph Company (GT&T) to end its monopoly on international voice and data are expected to begin next month and conclude by year-end, according to adviser to the Minister of Public Telecommunications, Lance Hinds.

Speaking at a public forum, ICT Conversation, held at the National Library earlier this week Hinds, however, virtually ruled out that phone company being compensated for the remaining nine years of its license that was automatically renewed in 2010 for another 15 years.

“That is not a discussion that is really going to happen because it is difficult to put a value on an exclusive license for nine years down the road because you (are) doing future projections on earnings and that gets into a science that will only get us into a dispute,” he said.

Hinds said the talks are also expected to focus on whether GT&T has any liabilities and what both sides would like to see a new license for the benefits of the company, government and public.

The ministerial advisor said the talks would mostly likely begin in September, 2016 and conclude by the end of October “if all goes well” and “once there are no difficulties that arise.” The Guyana government and Atlantic Tele-Network (ATN) in 1990 signed an exclusive agreement for 20 years with the option of automatic renewal.

In order to fully activate the liberalisation process, Hinds said the regulations associated with the Telecommunications Act 2016 would have to be crafted. The regulations would focus on licence and frequency authorisation, interconnection and access, pricing related to competition, universal access and universal services to establish operations in poorly populated areas that would not be commercially feasible, competition regulations to avoid market dominance, customer protection and spectrum management.

Overall, Hinds said, all systems should be in place by the end of November, 2016 to facilitate new players that would provide a range of new and diversified services at affordable prices in about one year. Hinds said a lot depends on new submarine fibre optic cables being landed in Guyana by companies such as Digicel.

The Telecommunications Agency would have to be in place before Minister of Public Telecommunications, Cathy Hughes activates the legislation so that that entity would be ready to process the licences, analyse whether companies meet the criteria for the service they intend to offer and assign frequencies.

While government hopes to hire local experts to fill vacancies at the Telecommunications Agency, Hinds said the United States Federal Communications Commission and the relevant Caribbean agency might be asked to provide training in the management of a liberalised telecommunications environment.

The Ministerial Advisor on Public Telecommunications said that telecommunication companies are unlikely to be enthusiastic about infrastructure sharing and net neutrality. “How we manage those kinds of things, as we move forward, is going to be tricky in terms of who is going to hold the infrastructure, who is going to rent from who, so all those conversations are going to come up because we simply can’t have a situation where every man jack is running fibre all over the town,” he said.

Hinds predicted that ensuring there is net neutrality would be “troublesome” because telecommunication companies only want to facilitate access to Voice Over Internet Protocol (VOIP) applications like WhatsApp and Viber for extra costs because they have been losing revenue from regular voice calls. “That is concretely opposite to what net neutrality is. This is a tough discussion all over the Caribbean. Guyana is probably the first Caricom territory to pass the dilemma of net neutrality legislation that there currently is in terms of ensuring that there is no discrimination in terms of the provision of data via telecommunication providers,” he said.

The adviser said even after new telecommunication providers come on stream, the provision of certain services by other companies via the Internet would require E-Transaction and Data Protection laws.

2016-08-19
Denis Chabrol
Previous: Mobile devices possibly taking a toll on mental health- top health official
Next: Konawaruk bridge to be ready for use next Monday