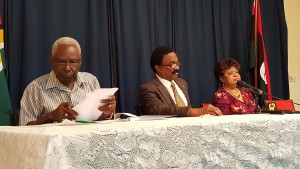 Chairman of the People’s National Congress Reform (PNCR), Basil Williams said Wednesday that if former party leader, Robert Corbin decides to contest the number two spot, it would be “licks for Williams.”

“To me, is a beat up. If Mr Corbin is to say he is contesting, it would be licks for Williams,” he told a news briefing. Corbin about five years ago stepped down from the leadership of the party and out of the political limelight.

Also nominated for the party chairmanship is Volda Lawrence.

Three persons- incumbent Treasurer Ronald Bulkan, Larry London and Annette Ferguson- were nominated for the post of Treasurer. London has already indicated that he is not interested in running for Treasurer.

Corbin is among several persons nominated for Chairmanship of the 59-year old party. Williams later said he welcomed the nominations. “I welcome it. It shows democracy at work.”

The PNCR Chairman, after he was pressed several times, shied away from questions about whether he believed that he should give up the party vice chairmanship due to the fact that he is saddled with responsibilities of Attorney General and Minister of Legal Affairs.

PNCR General Secretary, Oscar Clarke told a news briefing that most of the nominees for the various positions have not yet indicated whether they would be running for those positions. They have until August 24, 2016 to decide but if they do not, then their names would placed on the ballot paper.

The General Secretary said since the coalition, of which the PNCR is the single largest political party, won last year’s general elections, membership has grown from 6,000 to 10,000 persons.

Latest figures show that 135 of the 160 groups have submitted delegates for the three-day congress, the PNCR’s highest decision-making body.

Granger; PNCR Chairman Williams and the General Secretary would be addressing the Congress after which they would be discussed in a plenary sessions. Delegates will also deal with questions and motions as well as elect the Central Executive for which there have been 73 nominations.