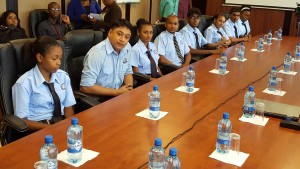 The trainee Air Traffic Controllers who will be leaving for Jamaica shortly for training.

The Guyana Civil Aviation Authority (GCAA) is to set up its own approved school in another six months to train Air Traffic Controllers, GCAA Director General, Egbert Field announced Wednesday.

“We need to have the programme approved and the approval process takes a while. It has to go through a certain number of stages,” he said. The Caribbean Aviation Safety and Security Oversight System (CASSOS) will be playing a part in approving the local institution.

He was at the time speaking at the signing of agreements with eight trainee Air Traffic Controllers (ATCs) to facilitate their training in Jamaica for the next 14 weeks because “we are in dire need of Air Traffic Controllers.” On their return, they will undergo on-the-job training with senior instructors. Through a guarantor arrangement, the GCAA is paying GYD$4.1 million for each student to undergo the training in Jamaica.

Field said when the local school comes on stream, senior Air Traffic Controllers would be designated instructors at the school.

The GCAA Director General said the decision to train more ATCs comes at a time when more aircraft would be arriving at the Cheddi Jagan International Airport and the aviation industry is growing considerably. “We are expending this amount you the youths of Guyana because it’s he vision of the government to enhance and empower the youths of this country. You will be the future and you will be taking over in just a short while,” he said.