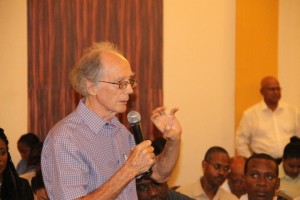 The Guyana Human Rights Association (GHRA) is calling for a range of measures to be implemented to ensure that the proposed State Asset Recovery legislation and the agency win broad-based political support.

In an effort to avoid such a pitfall, the GHRA recommended that the SAR Bill be broadened from asset recovery alone to a more substantive incorporation of the aims of the United Nations Convention Against Corruption (UNCAC). The Association also urged government to create a mechanism that brings a range of civic and private sector forces into the process of promoting the Bill. “Anything less will inevitably prompt the question whether ‘anti-corruption’ for the ruling party ever meant more than pursuing those now in opposition for corrupt acts committed while in power,” said the GHRA which has a history of being harshly critical of all governments in post-independence Guyana.

On the thorny issue of the appointment of the Director and Deputy Director of  SARA, the human rights body said it supports the anti-corruption agency being a parliamentary agency but expressed concern that “the proposed procedure is not sufficiently ring-fenced from partisan political influence.” The GHRA recommended that a two-thirds parliamentary majority system be used to ensure  the decisions related to SARA establishment cut across party lines. “Genuine bi-partisanship would require a two-thirds parliamentary majority.  Achieving this in the current atmosphere is remote…The SAR Bill effectively concedes the un-attainability of bi-partisan support by opting to create the Agency on a partisan basis,” the association said.

The GHRA said its concerns about SAR’s impartial image are rooted in the sweeping powers available to the Director of the Agency and the manner of his/her appointment.  The human rights watchdog explained that with respect to the powers, the following private and state institutions are only a selection of those which must comply with any request from the Director of SARA for information they hold-the Commissioner of Police, the DPP, Head of CANU, the Bank of Guyana, private banks, and the Chairperson of the Gold Board. “Rather than the established procedure whereby other agencies provide the Guyana Revenue Authority with information on which if can act, the new Bill requires the opposite: the GRA must provide information on which the SARA will act. The Director of SARA is effectively a political commissar exercising enormous powers.”

The GHRA said it was not challenging the wisdom of this accumulation of powers, but recommending safeguards against the ample mischief such an accumulation invites.  T

The envisaged procedure set out in the First Schedule to the Bill requires that “the National Assembly shall:  a) by a simple majority; and b) on the recommendation of the Parliamentary Committee on Appointments, appoint a Director and Deputy Director of the State Recovery Agency”.  Similarly, both officers may be removed from office by the same combination of the Parliamentary Appointments Committee. “With the Coalition Government enjoying a majority both in the Appointments Committee and in Parliament, as well as holding the Chairmanship of the Appointments’ Committee, this is effectively a Coalition Government appointment, dressed up as bi-partisan,” said the GHRA.

“The Guyana Human Rights Association (GHRA) is urging the Coalition Government not to sacrifice the powerful platform of transparency, accountability and anti-corruption on the altar of partisan politics,” said the association.

The GHRA says it welcomes the reference in the Explanatory Memorandum that the draft Bill explicitly seeks to give effect to the non-conviction-based recovery provisions of the UN Convention Against Corruption (UNCAC). At the same time, the association said unfortunately the same attention was not paid to the strong provisions for Governments to promote the participation of society in these matters. Article 13 of the UNCAC explicitly states that:

Each State Party shall take appropriate measures, within its means and in accordance with fundamental principles of its domestic law, to promote the active participation of individuals and groups outside the public sector, such as civil society, non-governmental organizations and community-based organizations, in the prevention of and the fight against corruption.