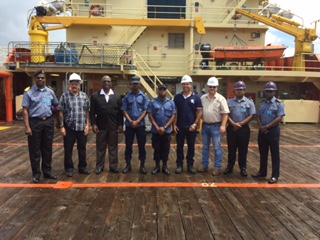 Guyana Defence Force (GDF) Coast Guardsmen are being trained aboard a supply vessel that is providing logistics support to ExxonMobil’s drilling operations in Guyana, the army announced on Tuesday.

“This training is a collaborated effort between the Guyana Defence Force and Edison Chouest Offshore LLC with the aim of enhancing the Coast Guard personnel knowledge on vessels, exposing them to new methods and providing an experience for the young Coast Guard soldiers,” the GDF said in a statement.

The Coast Guard personnel will be on board the vessel for 28 days of training after which they they will then be rotated out to allow for another two persons to enter the program, the GDF added.

The training is both deck side and engineering, covering a number of shipboard skills, exposing them to drills such as man over board, fire fighting, damage control, spill response and security awareness and training

On the deck side the Officer will be exposed to dynamic position system, use of radar, electronic chart display information system, navigational chart plotting, and correction of nautical charts and publications

The engineers will be schooled in starting and stopping procedures of main and auxiliary machinery, power distribution,  split Bus for DP 2 Operations, trouble shooting and maintenance to include preventative maintenance programme, liquid and dry cargo transfer system and oil Record Book Entries and Use

Edison Chouest Offshore LLC has been providing such training for other entities and have a vibrant mariners school in the USA.