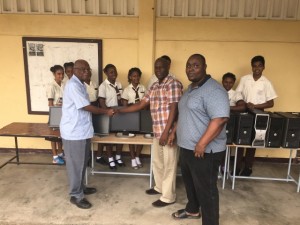 The computers were delivered to THS’s computer laboratory in July just before summer break, complementing 32 previously donated by NYTSG in 2007.

The NYTSG noted that with existing resources, the students and staff of THS computer laboratory attained a 100 % pass rate in Information Technology at the recent CXC exams and a 97% pass rate at EDPM, confirming that THS students are very adept and resourceful with information technology.

The addition of Mr. Prince’s donation will afford students and staff more opportunities to explore the wide world of the internet in a way that effectively makes the world smaller and learning more rewarding and edifying. They will also graduate from Tutorial brimming with the confidence of knowing that their fellow alumni and supporters in New York and the diaspora played a meaningful role in their educational development,”the organisation said in a statement.

“The Tutorial High School Alumni Group in New York, USA is one of the more active among Guyanese non-profit organizations in the USA. And giving back generously to their alma mater is a fundamental creed embedded in their mission statement,” the organisation said in a statement. 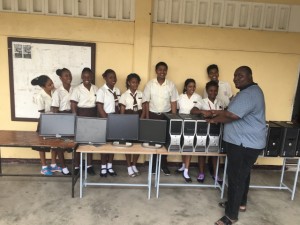 Apart from establishing and furnishing one of the first comprehensive computer laboratories in any high school in Guyana in 2007, they established the first high school Journalism Institute in Guyana in 2014 and still have other exciting path breaking plans and projects for their beloved alma mater.

Since its inception in 1939, Tutorial High School has attained the reputation of nurturing and promoting scholarship and sports. And alongside those ideals, they have attracted numerous friends and supporters. “That fact still holds true some eighty years hence in 2016.”

While Mr. Prince is not an alumnus of Tutorial,  the school said he is certainly is an admirer of the school’s output of professionals, technicians and others in New York and elsewhere in the USA that have been taught and mentored by that institution’s teachers and administrators.”the NYTSG said.