Guyana’s blind cricketers are in it to win it

Reproduced from BBC Latin America and the Caribbean
by Carinya Sharples 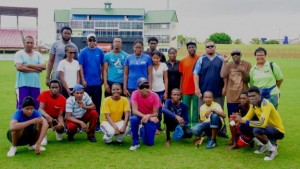 The team tries to raise funds well ahead of the tournaments, but it is not always easy (photo by Troy Parboo)

It is a drizzly Sunday morning in Guyana, and at the National Stadium a game of cricket is in full swing.
As in much of the West Indies, cricket here is a much-loved national sport. But something’s a little different about this match.
Instead of pitching the ball, the batsman rolls it across the grass to the waiting batsman, who is kneeling on the ground – primed for action.
Bat meets ball with a satisfying whack and a cheer erupts from the small group.
‘Not that different’

Welcome to a training session of the Guyana Blind Cricket Association.
“It’s not that different from sighted cricket,” says top player and board member Ganesh Singh, who has been blind since he lost his sight at the age of 17.
“In sighted cricket it’s all about eye and hand co-ordination, here it’s ear and hand co-ordination.
“Once you’re a keen listener, you pick up the line of the ball and then you can bowl, field and bat effectively. It’s very instinctive.”
Instead of the traditional leather-and-cork model, blind cricket uses a hollow plastic ball filled with iron beads that rattle as the ball moves, alerting players to its location.
“It’s a very vocal game,” explains Singh. 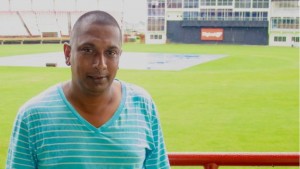 “For example, if the bowler is totally blind, the keeper will make some kind of noise behind the stumps so that the bowler can get his direction and know where to bowl the ball. There’s a lot of chatter and noise.”

Making the cut
Today the chatter is particular loud, as the team excitedly wait to hear who has been picked to play at the Regional Blind Cricket T20 championship in Trinidad.
Schemona Trinidad, who has travelled two hours from Berbice to get to the stadium – located just outside the capital, Georgetown – is not certain she will make the cut.
“I’m not absolutely sure. But I hope so!” she says.

The 21-year-old joined the team in the B2 (or partially sighted) category but a deterioration in her vision means she’s moved to B1, the category for blind players.
“When I started, I could see the ball a little bit, now it’s a bit more challenging,” she says.
But the friendly, banter-filled atmosphere makes playing less daunting.
“When you’re out there, you have to have confidence in yourself.
“Some totally blind people that have just started to play are afraid to run around without a guide, but the coach and other team members are like ‘Go for it! Chase the ball!’ so that helps.”

‘Life-transforming’
One of four female players on the team, Trinidad is determined to reach the top.
“I’ve heard that they’re going to have a female [blind cricket] West Indies team from next year,” she says excitedly.

Given that the West Indies recently won its first Women’s World Twenty20 in April, the timing could not be better.
Trinidad is not the only one to wax lyrical about the game and its off-pitch benefits.
“Blind cricket basically helped me to transform my life from being someone who was isolated from society, lacked self-esteem and confidence, to someone that is fully empowered,” enthuses Singh.
In 2006, he and two other Guyanese cricketers, Oliver Kerr and Patrick Dillon, were part of the first West Indies team to participate in the Blind Cricket World Cup, held in Pakistan.
Though perhaps Singh’s success is no surprise, given that the village where he hails from, Unity, also produced Shivnarine Chanderpaul, former captain of the West Indies cricket team, and women’s cricketer Indomatie Goordyal.

With another Blind Cricket World Cup set to take place in India in January 2017, the team are hoping to do well at this weekend’s regional T20 championships.
Coach Bharat Mangru is confident.
“This is the first season that we’ve had a full compliment of B3 players [those with better vision]. They’re young, energetic and that feeds the other players.
“Over the years we went out there to compete. But I think this year our message is: Win.”

Funding challenge
One potential roadblock to success is the lack of stable financial support.
“Prior to a tournament or any time we need funding, we start writing letters soliciting funding from private sector and government agencies. But it’s not reliable,” says Singh.
For the forthcoming trip to Trinidad, they are about $1,500 (£1,150) short.
“But we’re hoping that we can get it. We’re always optimistic,” says Singh.
Yet just as they refuse to let a little rain get in the way of their practice, the team are determined to play on.
Coach Mangru is not surprised.

“In sighted cricket, the first thing some of the guys would have said is, ‘Ah Coach, man! It’s raining. We got to come to the ground?’ But these guys called me at home from the stadium.
“That’s the kind of commitment there is.”