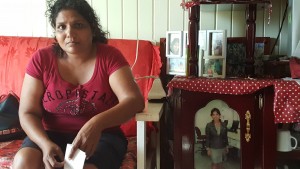 Radica Thakoor speaking with reporters at her Mon Repos, East Coast Demerara home. A photograph of her late daughter, Sheema Mangar, is in the cabinet.

The mothers of two children, whose deaths have so far remained unsolved, Sunday welcomed the Guyana Police Force’s announcement that those cold cases would be reopened.

Demerara Bank employee, Sheema Mangar, 21 years old, was killed by a man who grabbed her phone and ran over with his vehicle at the corner of Camp Street and North Road on September 10, 2011. Almost four years later on January 26, 2014, costume designer, Trevor “Chiney” Rose was shot dead in a car.

“I am overjoyed and I do hope that something can come out of it. I am looking forward to them solving the case because, as a mother who has lost her only son, you can imagine how I feel,” said Rose’s mother, Lilian Browne.

Police have also announced that they planned to re-examine the files concerning the killing of security guard, 19-year old Monica Reece whose body was dumped on Main Street opposite Geddes Grant (now Courts) on April 9, 1993. Her relatives could not be immediately contacted for a reaction. 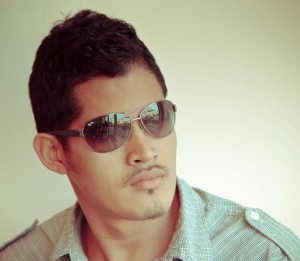 When contacted, Mangar’s mother, Radica Thakoor, said she was a bit surprised that the police announced that they would revive the probe into her daughter’s death. Given the track record of the Criminal Investigations Department under the leadership of Senior Superintendent, Wendell Blanhum in solving murder cases, she expressed confidence that her daughter’s killer would be brought to justice. “I feel that it is in the right hands now. So much cases the Crime Chief is solving, we know that he is going to do a just job in bringing forward the truth,” the businesswoman told reporters at her Mon Repos home where several pictures of Mangar have been posted. It was on May 22, 2016 that the skeletal remains of Babita Sarju were unearthed from aback her husband’s house on Seaforth Street, Campbelville almost seven years after she had disappeared. Her husband and his friend have since been charged with her murder.

Thakoor said tests on strands of what was believed to be her daughter’s garment that were  found on a vehicle had been sent overseas for forensic tests but based on her last conversation with the then Crime Chief, Seelall Persaud, who is now Police Commissioner, there was no progress in solving the crime. Thakoor said since the APNU+AFC coalition government was voted into office in May, 2015, she had written to Public Security Minister, Khemraj Ramjattan asking him to look into the case.

The woman said she had no knowledge about the motive for the crime, although she had heard that her daughter had been “talking” with a man but there was no serious relationship. “I don’t know the reason behind this. Many nights I sit down, close my eyes and just wondering the reason why, because of a phone, someone would hire a car 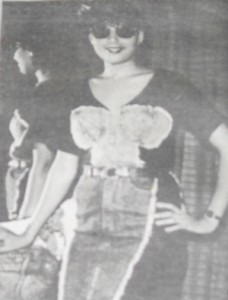 take her phone and run her over,”  she said.

Unlike Thakoor, Browne said she was positive that she knew her son’s killer and the reason for gunning him down. She said she was reliably informed that her son was killed because he had been having an affair with a businessman’s wife. Browne said from what she has learned,  a phone in the woman’s possession had fed back images of her son and the woman to the businessman and his son. “I believe it because I know my son and I know that he wasn’t involved in any crime…I believe of who he is- my son got eight children with five different women-and I believe when they said that it was because of a woman that he got killed,” he said.

Rose’s mother said she was hopeful that her son’s killers would be found, charged and prosecuted due to the track record of the Guyana Police Force since the change in government.

2016-07-09
Denis Chabrol
Previous: Argentina providing assistance in security, health, other areas
Next: Guyana’s blind cricketers are in it to win it