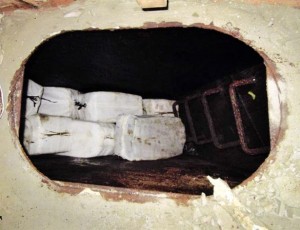 Where the cocaine was hidden in the boat

British High Commissioner to Guyana, Greg Quinn on Monday hailed the work of the Customs Anti-Narcotics Unit (CANU) , Guyana Police Force  and witnesses who testified in the United Kingdom’s biggest cocaine haul that had links to Guyana.

“Her Majesty’s Government, and the UK National Crime Agency , are extremely grateful for the support and assistance provided by the Guyana Customs Anti-Narcotics Unit and the Guyana Police Force during the investigation.  We are also grateful to those witnesses from Guyana who were willing and able to give evidence during the trial.  Our cooperation has resulted in a significant drug interdiction and the conviction of those involved in this crime.  We look forward to continued cooperation in the coming months and years,” said Quinn in a brief statement.

The captain and first officer of an ocean going tug boat have been found guilty of drug trafficking following the biggest ever United Kingdom seizure of class A drugs.

Mumin Sahin, 47, and Emin Ozmen, 50, were found with 3.2 tonnes of the drug, worth £512 million, when they were stopped by police off Scotland’s north-east coast in April last year.

Four other men; Kayacan Dalgakirin, 54; Mustafa Guven, 48; Umit Colakel, 29; and Ibrahim Dag, 48, were cleared of the allegations after the jury returned not proven verdicts.

Mustafa Ceviz, 55; Abdulkadir Cirik, 32; and Muhammet Seckin, 27, had been cleared earlier in the trial.

Both men convicted are first offenders. Judge Lord Kinclaven has remanded them in custody until they are sentenced next month.

The cocaine, with an estimated potential street value of £512 million once adulterated, was found hidden on board the Tanzanian flagged MV Hamal in April 2015. 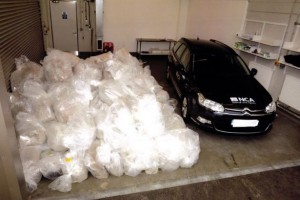 The vessel had been intercepted by the Royal Navy destroyer HMS Somerset and Border Force cutter HMC Valiant in the North Sea approximately 100 miles off the coast of Aberdeenshire.

They were acting on intelligence supplied by the National Crime Agency (NCA), working in co-operation with the French customs investigation service DNRED and the UK’s National Maritime Information Centre.

NCA officers were deployed on HMS Somerset as the MV Hamal was boarded and escorted into the Port of Aberdeen.

After the vessel arrived in port on Friday 24 April the cutter crew and specialist Border Force deep rummage teams commenced a search, alongside NCA and Scottish Police Authority forensic teams.

Ballast tanks on the Hamal were pumped out so that search crews could gain access. As they began to drill through a metal panel inside one of the tanks, a white powder was seen on the drill bit. It tested positive for cocaine.

The panel was removed, revealing bales of cocaine concealed inside a neighbouring compartment. The way the bales were stacked inside showed that there must be another access point in the vessel.

Investigators began a detailed search for the main access point and in crew quarters above the compartment, underneath a medical cabinet, they found an area of floor that had been cemented over. They chipped through the cement and found a sealed metal hatch, which provided access to the tank containing the cocaine.

Border Force officers wearing specialist breathing equipment entered the tank and over the next two days (27 and 28 April) 128 bales of cocaine were removed, each weighing approximately 25 kilos. The total weight of the cocaine taken off the MV Hamal was in excess of 3.2 tonnes.

A mobile crane removed the recovered bales from the vessel and Police Scotland  then took the drugs under armed guard to a secure location.

Forensic tests revealed the cocaine had a purity of between 58 and 74 per cent. It would likely have been cut three times over before being sold, meaning it had the potential to create almost ten tonnes of adulterated street level purity cocaine, valued at around £512 million.

NCA officers detained the nine Turkish crew members and they were formally questioned in Aberdeen, while investigators scoured the ship for clues as to the vessel’s route.

A deck log and engine log books stated that the MV Hamal had spent time in West Africa after leaving Turkey. However, analysis of the ship’s navigation system showed that, even though the AIS navigational beacon was turned off, GPS had continued to monitor movements on a laptop computer.

This proved that the ship had sailed from Tenerife on 8 March 2015 and travelled across the Atlantic, arriving in Georgetown, Guyana, on 21 March. It left five days later and, significantly, paused its journey for around 12 to 15 hours around two days after leaving port. This is where investigators believe the drugs were loaded on.

Following the seizure NCA international liaison officers worked with the Guyanese authorities to trace the location of the vessel whilst it was in Guyana as well as obtaining details regarding individuals associated with it. Mobile phone evidence placed a number of the crew in the Georgetown area of Guyana, contradicting the log books.

Officers also recovered a coded satellite phone email message from the vessel, containing a series of numbers. When checked against a key found in a notebook on board this corresponded with co-ordinates for a location in the North Sea, north of the Dutch/German border, where investigators believe the drugs would have been offloaded.

Following an 12 week trial at the High Court in Glasgow, ship captain MuminSahin and first mate EminOzmen were found guilty of two counts of drug trafficking. The charges against four crew members were found not proven. Three others had been acquitted earlier in the proceedings.

They will be sentenced on 12 August.

NCA senior investigating officer John McGowan said: “This seizure was unprecedented in scale, the biggest ever class A haul in the UK, and we believe the biggest ever maritime seizure of cocaine in Europe.

“While we suspect that the end destination for this load would have initially been mainland Europe, there is no doubt given the size of the seizure that a good percentage would have ended up being sold in the UK and fuelling further criminality.

“Our investigation has been truly international and we have relied on support of law enforcement colleagues across the globe, including France, Turkey, Guyana and Tanzania.

“I would like to pay tribute to the assistance we have received from the Royal Navy, Border Force, Police Scotland, the SPA and the Crown Office in making this seizure and putting those responsible before the courts.”

Tony McMullin, Regional Director, Border Force North Region said: “The skill and expertise of Border Force search teams are world-leading and this was one of the most intricate concealments we’ve ever encountered.  Once discovered, it took nearly three days for the team to remove all the cocaine bales from Hamal – demonstrating the scale of the this operation and the ability and dedication of our officers.

“We work closely with law enforcement colleagues in the UK and around the world to protect the security of our border.  By preventing drug trafficking and putting those responsible behind bars, we are also protecting our communities from the harm these drugs could have caused.”