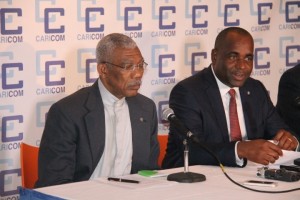 Leaders of the 15-nation Caribbean Community (Caricom) Wednesday night wrapped up their summit in Guyana agreeing to sign an Arrest Warrant Treaty before yearend.

Caricom’s Chairman- Dominica’s Prime Minister, Roosevelt Skeritt said the proposed accord would help tighten security in a region whose scattered islands have been plagued by narco-trafficking, gang violence and gun crimes.

“The Arrest Warrant Treaty would enhance law enforcement ability to address matters of cross-border crimes,” he said.  Caricom countries hope to use the accord to capture fugitives who would have committed crimes in one member state and would have fled to another.

Skeritt, however, pointed out that framers of the Treaty would have to consider constitutional limitations of the former Dutch colony of Suriname to participate in the process. Except for Suriname and Haiti, the other 12 independent member states are former British colonies. Montserrat is a United Kingdom dependency.

The United States-sponsored annual Trade Winds exercise includes soldiers and police from across the Caribbean who train and share experiences in combating transnational and domestic security threats.