Caricom to lobby US against cancelling correspondent banking relations 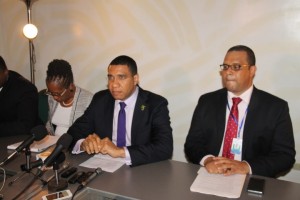 Jamaica’s Prime Minister, Andrew Holness (centre) briefing reporters about the outcome of the Caricom Summit that was held in Guyana from July 4 to 6, 2016.

“We have advanced on this matter in terms of agreeing that we should seek to lobby directly the US government and to increase our voice in various international fora and indeed to enlist the support of friendly countries on our behalf,” Jamaica’s Prime Minister, Andrew Holness told a news conference in Guyana where Caricom leaders held their annual three-day summit.

He said if American banks continue to cut ties with their counterparts in the Caribbean, the region’s economy- which depends on trade, financial services and tourism- could face dire consequences.  He argued that maintaining correspondent relations between American and Caribbean banks was key to maintaining and investment-friendly environment.

“The matter is one that could lock out the Caribbean from the international financial system if it is not addressed,” he said.  Holness acknowledged some Caribbean countries have not complied with international standards to seal off their banks from funds that could be used by terrorists and money launderers.

The Jamaican Prime Minister said the US should not only be interested in imposing financial requirements but also that Caribbean economies are buoyant, stable and attractive. “Any threat to the banking sector is not just a threat to the economies of the Caribbean, it is also a threat to the economy of the United States so I think will reason will prevail. Our voice needs to be a little louder so that the people who matter and make the decision hear,” he said.

Authorities said all of the commercial banks in the Central American nation of Belize have been blacklisted by US banks. Holness called on the US to “reward” countries that have made significant improvements to monitor and detect suspicious transactions.

Antigua and Barbuda’s Prime Minister, Gaston Browne noted that banks in each Caribbean country has had at least one bank’s correspondent relationship cut off from the US. He said in one case, all international transactions had to pass through a country’s central bank.

Caricom countries have already expressed concern that if such banking ties are cut off, Caribbean commercial banks might have to route international money transfer transactions through China or Turkey which could in turn increase cost of living due to higher charges.

Caricom leaders met in Guyana from July 4 to 6 to discuss a range of issues including security, the status of the European Union-styled Caribbean Single Market, the impact of BREXIT and relations with Cuba and the Dominican Republic.